Bafana can't cut the mustard - here are our player ratings 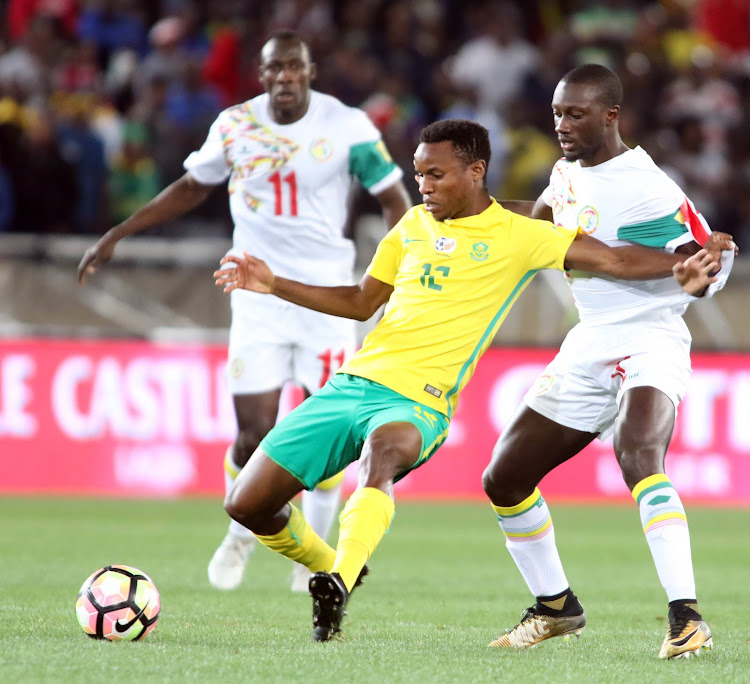 A disappointing night for Bafana could well have turned out a lot differently had chances been taken but it will be another four-year await for fans hoping to see their country compete at the World Cup finals.

The publication ratings of the Bafana Bafana players in Friday’s 2-0 defeat recognises the slick interchange of passing through much of an exciting first half but is also cognisant of the epidemic in front of goal that has beset the local game.

Back as captain and playing with a face mask to protect his broken eye socket‚ Khune should be given an automatic 10 out of 10 just for his effort to play in the game. He made no errors but will be disappointed with the two goals that beat him as his defence left him horribly exposed.

The left-back was too slow and indecisive going forward‚ and ineffective with the delivery of the ball. And he was also caught horribly out of position as Senegal swept forward to score their second goal.

Positioning for the 34-year-old centreback was too static and he was often sucked across when mistakes were made by his defensive partners. Did not command the air as he had in the past.

Had a tough evening dealing with Sadio Mane and the rest of the Senegal attackers and it was his inability to clear in the air‚ and consequent defensive error giving the ball away‚ that led to the second goal. He was also all at sea‚ and backing off as Mane threaded the ball through for the first.

The own goal was unfortunate but Mkhize battled against top quality opponents and his inability at international level was made all-too clear. Although he did battle forward in search of adding impetus to the attack.

Was the link for all the smart passing movement in the first half and again worked his socks off in another unselfish performance. But he battled without possession to make an impact in the middle.

A player who is much more comfortable in a slower game found it hard to keep up as he pushed forward far too often‚ losing possession and negating his best ability to provide a screen for the back four.

One of the few South African players to get off a shot on target‚ he was part of many enterprising moves without really making much of an overall impact on the game.

Had one shot on target which he hit straight at the keeper‚ when a yard either side might have resulted in a goal.

Back in the starting lineup he crashed the ball again the crossbar midway through the first half and then hit a free-kick just over the top but never used his pace to proper effect.

Full of running and passing but not able to get a crack in on goal. Had a chance with the rebound off the keeper in the first half but was a split second too slow and found himself offside at other crucial times.

Came off the bench with 28 minutes to go and added a little bit of industry to the South African midfield.

He had only seven minutes at the end when the game was already lost.

'Yeye' confident Baxter will have good plan for Bafana

Reneilwe Letsholonyane has backed Bafana coach Stuart Baxter and the players to come good against Senegal.
Sport
4 years ago

“Tyson”‚ who has returned to the squad after missing the 3-1 win against Burkina Faso last month due to injury‚ is not fazed by the fact that Bafana ...
Sport
4 years ago

Thulani Serero has asked to be excused from Friday's 2018 World Cup qualifier against Senegal at Peter Mokaba Stadium if he is not guaranteed of ...
Sport
4 years ago

Safa bails out 'Tower' ahead of crucial game

Former national team midfielder John “Dungi” Moeti says Bafana Bafana will have to improvise if they are to get the better of Senegal in their ...
Sport
4 years ago
Next Article