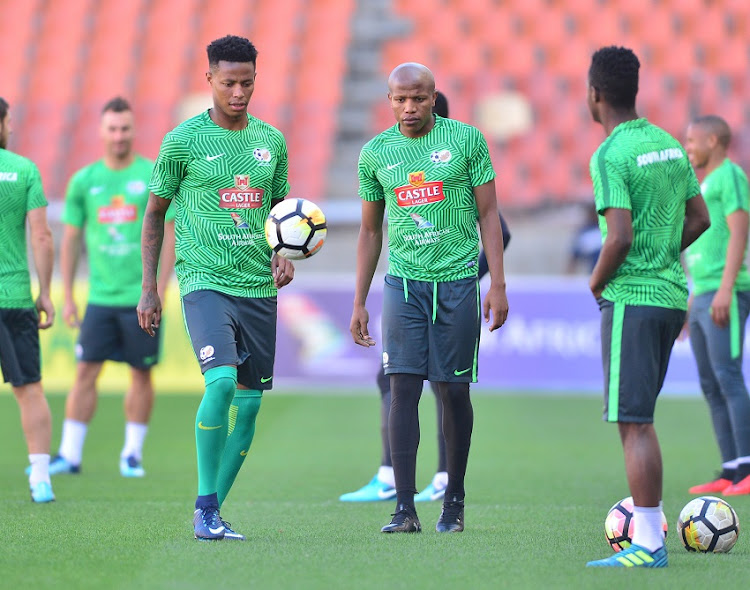 Baxter has had to make two enforced changes from last month’s 3-1 Russia 2018 Group D win against Burkina Faso‚ with Manyama replacing Andile Jali at deep striker or No.10‚ and Dean Furman returning to the central midfield for Bongani Zungu.

Apart from that‚ the Bafana coach has retained his starting lineup from the Burkina win at FNB Stadium.

Both Zungu and Jali are suspended for Friday night’s game at Peter Mokaba Stadium in Polokwane (kickoff: 7pm)‚ but available again for Tuesday’s return match in Dakar. Win both games and Bafana will qualify for the World Cup.

Itumeleng Khune will play at goalkeeper with a face mask as protection for the facial injury he sustained in Kaizer Chiefs’ 1-0 Telkom Knockout win against Chippa United on Sunday.

The back four of Thamsanqa Mkhize at right-back‚ Morgan Gould and Clayton Daniels at centreback and Sifiso Hlanti at left-back‚ who impressed against Burkina‚ have not been tampered with.

In midfield‚ Furman will be deployed behind Kamohelo Mokotjo in the centre. Themba Zwane and Sibusiso Vilakazi are the wide players.

Manyama brings pace and skill to the Bafana frontline deployed behind Percy Tau as the strikers.

With a win a priority it is an attacking starting combination named by Baxter.

He has left some firepower on his bench too‚ though‚ in the form of Siphiwe Tshabalala‚ Phakamani Mahlambi‚ Tiyani Mabunda and Keagan Dolly.

'Yeye' confident Baxter will have good plan for Bafana

Reneilwe Letsholonyane has backed Bafana coach Stuart Baxter and the players to come good against Senegal.
Sport
4 years ago

Indications had been that‚ given the scale of this game‚ Baxter might not release his starting XI ahead of time as has been his trait in his previous matches in these qualifiers.