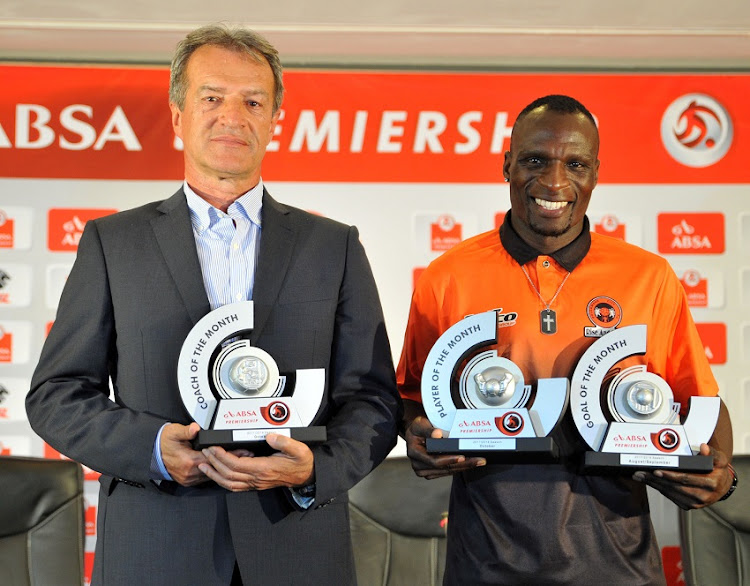 Ramagelela also won goal of the month for August and September‚ as voted for by supporters‚ for his strike in a brace scored in City's 2-1 PSL win against Mamelodi Sundowns at Loftus Versfeld on August 22.

Celtic won three games and lost one in October and currently sit in fourth place in the PSL.

"I understand this reward as a reward for our teamwork because we have been working together all the time as a team starting from our players‚ to our technical team and technical director‚ through all departments like medical and technical support‚ and our management‚" Jelusic said.

"I think there are several reasons why we have had some good results. One is the work we have put in‚ another is that we have several new players and are a more competitive team.

"A third is the methodology between training pitch and the match. And the fourth is that it is important to have a good balance within the team."

Earning the recognition he deserves with his deadly right boot.
Polokwane City’s Rodney Ramagalela is the #AbsaPrem Player
of the Month for October. #wozanazo pic.twitter.com/XO1IpqrDN1

Ramagalela scored twice and won some man-of-the-match awards in October‚ helping City to a win and three draws in the month.

"I would like to thank my team-mates‚ the coach‚ and Mr Johnny [Mogaladi‚ Polokwane's chairman] for giving me a chance and making sure I'm performing on the field‚" Ramagalela said.

"I think we as Polokwane have done well to ensure that we are in a safe position."
City are in 12th place in the PSL.

The awards were presented at the PSL offices in Parktown‚ Johannesburg on Thursday.