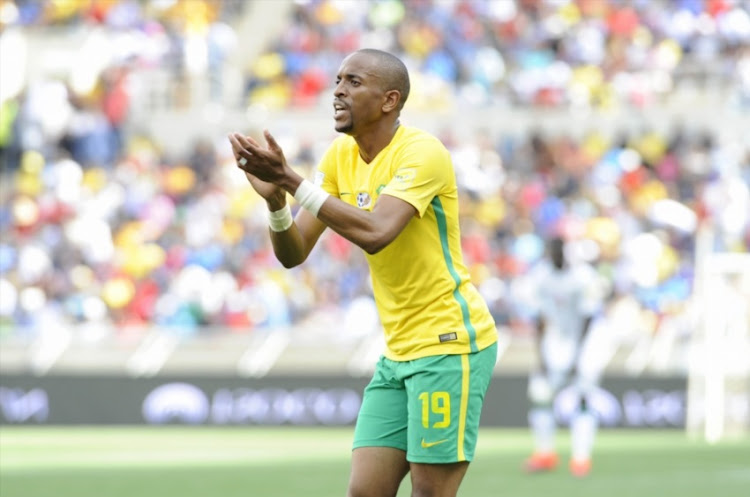 Former national team midfielder John “Dungi” Moeti says Bafana Bafana will have to improvise if they are to get the better of Senegal in their must-win Group D 2018 World Cup qualifier in Polokwane on Friday night.

Bafana coach Stuart Baxter has had to deal with suspensions and multiple injuries to key players and this could have an impact on the kind of team he sends out.

Baxter will be forced to make some key changes to personnel but Moeti feels the Briton has players good enough to fill the central defensive positions.

“I think Baxter doesn’t have too many options as the situation of the missing players is beyond his control‚” said Moeti.

“He can use what is available.

"Also remember that he has to keep it very tight in the middle while also maintaining the consistency in the team’s attack.

"It’s not going to be simple for him to just call up new players and plug the gaps.

“But it will make sense obviously to start with Dean Furman‚ Kamohelo Mokotjo and Tiyani Mabunda because they’ve been there as part of the set-up since he took over.

"And from there he can use some new players as back-up.”

When Fifa confirmed the suspension of Zungu and Jali for Friday's game against Senegal‚ it was assumed that Baxter would have more than enough cover in Mokotjo and Hlompho Kekana.

But Kekana was forced to withdraw from the camp following the death of his mother-in-law in a car accident this week.

This threw a spanner in the works for Baxter and he quickly drafted in Kekana’s counterpart at Sundowns‚ Mabunda.

Questions remain about Mabunda’s match fitness after recent injuries and an unnecessary red card against Kaizer Chiefs that saw him missing a couple of matches in the PSL.

Mabunda did‚ however‚ play in Sundowns' 3-1 league victory against Orlando Pirates.

On the other hand‚ Furman has been a permanent feature in SuperSport’s line-up this season‚ both in the PSL and the Confederation Cup.

Furman’s zeal and workaholic nature has also won him a regular position in Baxter’s team despite his limitations in creativity.

Moeti suggested that Baxter could also start with the three defensive players as he did in the last match against Burkina Faso where he played Jali to good effect behind Percy Tau‚ who was also supported by his Sundowns team-mates Themba Zwane and Vilakazi.

The system seemed to work as Tau‚ Vilakazi and Zwane got the goals in the 3-1 victory against the Stallions.

Another option that seems more viable would be to bench one between Furman and Mabunda and employ Lebohang Manyama where Jali was deployed against Burkina Faso.

Moeti seemed to like that idea and he acknowledged the importance of winning this match.

“Baxter has very creative and attacking players‚ and Manyama is one of them‚" Moeti said.

"But you need to balance that by making sure that Senegal doesn’t get the upper hand‚ especially at home.

"So the same approach that Baxter had against Burkina Faso is what I expect to see.

“We must play as if it’s our last match.

"That’s what happened against Burkina Faso and that’s why many of us were surprised of the result.

“Bafana’s win against Burkina Faso raised the level of our expectations.

"So they go into this match with pressure.

"Psychologically it’s going to be different than that Burkina game‚” said Moeti.

With all the expectations‚ Moeti believes Bafana can beat Senegal.

“We always have the edge against the West African teams because of our style of play.

"It’s too difficult for them to handle our speed and quick interchange of passes.

“But we can also be vulnerable to their strength because they are strong physically‚ they can run and they are usually organized at the back.

"So it’s how we counter their strength and how we maximize on our advantage that will make a difference.”