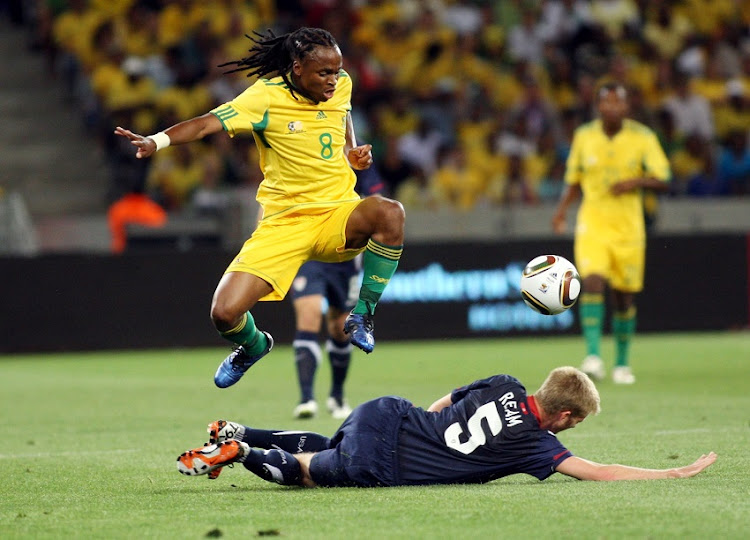 Siphiwe Tshabalala from Bafana Bafana jumps over Tim Ream from the USA during the Nelson Mandela Challenge between South Africa and USA at Cape Town Stadium on November 17, 2010 in Cape Town, South Africa.
Image: Shelley Christians. 17/11/2010. © The Times

Siphiwe Tshabalala marks his return to the South African national team after an absence of almost four years when the side takes on Senegal in must-win home and away World Cup qualifiers over the next week.

Tshabalala will look to add to his 88 caps and would not have been called up if coach Stuart Baxter did not see an active role for him in the side.

The Kaizer Chiefs playmaker has netted 12 goals for his country and often come up with a stunner when it was needed most.

It is also worth noting that Bafana have never been on the losing side when Tshabalala has found the back of the net.

Tshabalala’s first goal for Bafana was one of his best as he exchanged a one-two with Benni McCarthy before executing a superb chip over the Paraguay goalkeeper.

This was a match of milestones as it was also Bafana’s first win over South American opposition and marked McCarthy’s climb to the top of the country’s scoring charts with his 30th goal that took him past Shaun Bartlett. SOUTH AFRICA 2 NORWAY 1

Tshabalala has often come up with the magical moment when Bafana needed it most and in this friendly against Norway in Rustenburg he delivered again.

Two minutes into injury-time at the end of the game‚ Tshabalala smashed the ball into the back of the net from 30-yards with a goal not unlike the one he would score against Mexico later on. PARAGUAY 1 SOUTH AFRICA 1

Tshabalala likes games against Paraguay as he executed another stunning strike from 35 yards.

He picked up the ball in midfield and with the Paraguay defenders standing off him‚ rifled the ball into the back of the net to secure a pre-2010 World Cup draw. SOUTH AFRICA 1 MEXICO 1

His most famous Bafana Bafana goal came in the opening game of the 2010 World Cup as Tshabalala collected a through-ball from Kagisho Dikgacoi‚ raced clear and smashed his shot into the top corner.

It was later nominated for a FIFA Puskas Award. SOUTH AFRICA 3 GABON 0

The second game in a two-match caretaker role for Tshabalala’s current Kaizer Chiefs coach Steve Komphela ended in an easy 3-0 win over Gabon and it was the winger who got the scoring underway with a fantastic free-kick from 30-yards into the top corner of the net.