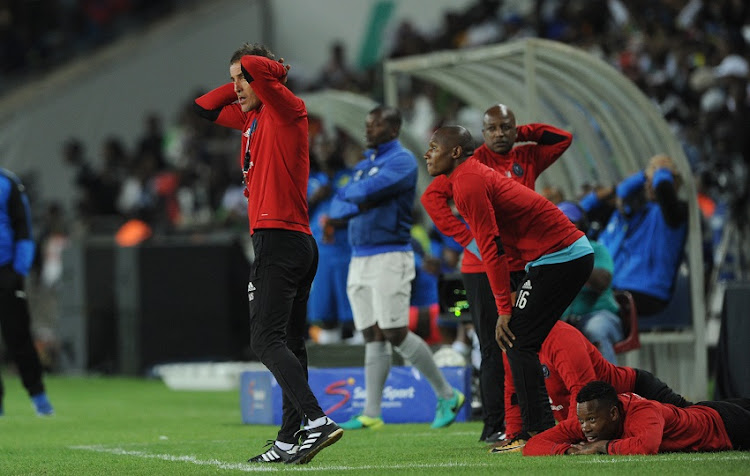 Orlando Pirates coach Milutin Sredojevic refused to put any blame on his goalkeeper Wayne Sandilands after the Buccaneers were swept away 3-1 by Mamelodi Sundowns in Wednesday night’s Absa Premiership defeat.

Sandilands was left stranded by Abbubaker Mobara’s attempted clearance ricocheting off Hlompho Kekana past the keeper for Sundowns’ opener in the first minute at Orlando Stadium.

It would be unfair to put blame on Sandilands being out of position for that unexpected ricochet.

However in the 13th minute Kekana’a spectacular lob from inside his half caught Sandilands off his line‚ and the backpedaling keeper fumbled the swerving attempt for Downs’ second.

“First of all you will never hear me blame an individual player because I have the highest possible degree [of respect] for the player.

"And no player ever made an intentional mistake‚” Sredojevic said afterwards.

“At half time‚ my first gesture after coming in [to the change rooms] was to sit beside Wayne and tell him that this was part of history.

“I said: 'Take scissors and cut it off. The game starts for you now.

"Now show what you are capable of doing. All of us have trust‚ confidence and belief in you.'

“All the other players accepted this.

"I believe in the second half he was OK.

“I do not go back and blame anyone because it's not my culture. I would rather look for solutions.”

After Marc van Heerden pulled one back for Pirates with a first-half free-kick‚ Sandilands could not have stopped substitute Anthony Laffor’s blasted third for Sundowns in added time.