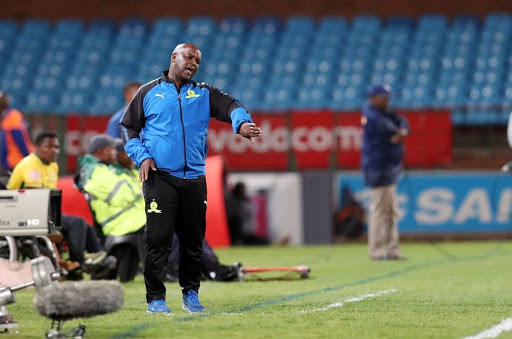 Pitso Mosimane says he is standing by his philosophy and approach to the game and looking for his Mamelodi Sundowns charges to dig deeper as they deal with the fall out of three successive loses and elimination from the Telkom Knockout.

“In the life of a coach‚ there are two things that happen: you are being praised or criticised‚” he said after the 1-0 defeat to Chippa United in the first round of the cup in Mdantsane on Sunday.

“Sometimes you are being criticised unfairly and other times it is justified.

“Other times you are praised. But you must never let it affect your life and your career or your belief in the team or your philosophy of the way football should be played.

“We have to move on. We have to go through this (slump).”

Mosimane said he had to keep up a stoical front now as the club readied for Wednesday’s encounter against Orlando Pirates.

“I’m the leader. If I press panic buttons then the players will also lose it. The reality is to stay grounded.

“I’m the head of the club and keep everyone calm.

“Also we must look at the game. Are we playing well? Yes.

“We dominated all of the last three games we played‚” he said of the home defeats to Kaizer Chiefs and AmaZulu and now the first-ever loss to Chippa.

Sunday’s defeat was the first time in six years that Sundowns had been knocked out in the first round of the Telkom Knockout.

“We pushed them and tried to go in and penetrate but we couldn’t.

“To be honest‚ it didn’t happen‚ we didn’t crate any real chances‚” Mosimane said of the Sundowns’ showing in the Eastern Cape.