Tinkler gets another bite at Confed glory 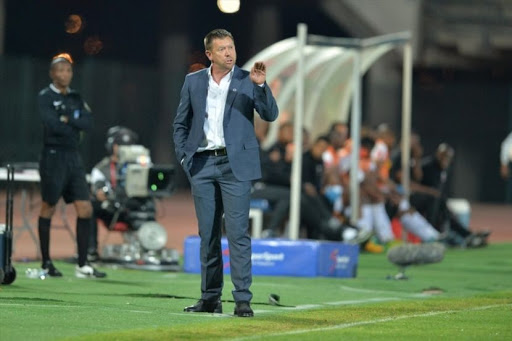 SuperSport United coach Eric Tinkler aims to atone for his 2015 CAF Confederation Cup final loss when he gets a second bite at the cherry against TP Mazembe.

Matsatsantsa a Pitori will take on the Congolese giants in the final with the first leg scheduled for the weekend of November 17-19 and the second leg in SA the following weekend.

Tinkler was in charge of Orlando Pirates two years ago when they were beaten 2-1 on aggregate by Etoile du Sahel in the final of the competition.

SuperSport marched into the final after a comprehensive 4-2 aggregate win against Tunisian side Club Africain.

The 47-year-old was assistant coach to Roger de Sa when Pirates overcame Mazembe 3-2 on aggregate in the 2013 CAF Champions League preliminary rounds.

The former Bafana Bafana international midfielder is confident that his team can finish off the job against the team SuperSport drew 2-2 with on aggregate in the group stages this season.

"You are talking about a team that has a lot of experience. They [Mazembe] have won Champions League, Confederation Cup, but it's a team we have played and beaten [at Pirates]," Tinkler said.

"I explained to the players that we needed to come here to a hostile crowd and environment and play with no fear. That's how we have to treat the final against Mazembe. We have beaten them in the past and can do it again.

"I am extremely proud of the performance of the team. It's been a long road to get where we are and I feel it is thoroughly deserved to be in that final."

They put on a dominant performance on Sunday night in the semifinal second leg away from home against Club Africain to win 3-1 via a Bradley Grobler brace and Jeremy Brockie strike.

The PSL will have to reschedule at least two of their Absa Premiership matches (perhaps also a Telkom Knockout match if they progress to the last eight) as they were meant to face Ajax Cape Town on November 22 and Polokwane City three days later.

PSL acting chief executive Mato Madlala said contingency plans for the rescheduling of games had already been made. "Just like we did with Mamelodi Sundowns, we have put a block [of alternate dates] for any such eventualities, so there will be no problem. It is good for the PSL that we are being represented in continental competition."