Menzo out to erase Ajax's miserable history book in Bethlehem 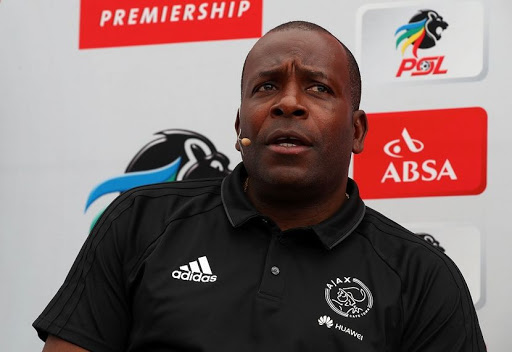 Coach Stanley Menzo has told his Ajax Cape Town players to forget the past as they prepare for an away trip to Free State Stars in the Absa Premiership on Wednesday.

Ajax have a dismal return from their trips to face Stars‚ with just a single victory in 18 previous away games‚ which came in the Telkom Knockout semifinals in 2008.

The Urban Warriors have therefore won none of their 14 visits in the league‚ but Menzo says the players have to get that out of their heads as they look to improve on a poor start to the season at Goble Park in Bethlehem.

“For me that does not count‚ it is only a challenge‚” Menzo said.

“Let’s get those three points‚ let’s show that the history doesn’t mean it will be the same in the next game.

“There will always be a time you will win there – it might be now. I don’t believe that just because we have struggled there before means we will always struggle.

“If it is in the players’ minds that‚ ‘We never win here’‚ then we don’t have to go there. It’s not good. So let’s change that historic thing and go and try to win.”

Ajax did come away with a point in last year’s fixture that finished 1-1‚ which was also the first game in charge for Menzo after he took over from Roger de Sa.

He says it was a rude awakening for him in the PSL.

“The bus drive – I will never forget that! But now I am experienced‚ so I know what that drive means‚” he said.

“It was my first match in the PSL and it was a draw. Normally I would sign for it (be happy with it)‚ but now I want to come back home with the three points because that is what we need at this moment.”

Ajax will return home to face another Free State side on Saturday‚ Bloemfontein Celtic‚ and Menzo said the entire complexion of their season could be changed by six points.

“It’s an important week for us‚ Free State and Bloem‚ and then the cup (Telkom Knockout). So it would be good for us‚ for the team‚ for the players‚ to get those three points.

“It won’t be easy‚ we know‚ but we have to go for it. We will have to work hard for it‚ be committed. It’s not impossible.”

Ajax will be without injured midfielders Tercious Malepe and Morne Nel‚ while Toriq Losper is also not quite ready to play but could feature against Celtic.

Ajax have just five points from a possible 18 in the league so far this season and last won away in May when they claimed a 1-0 victory at Chippa United.

After a poor start to the new season‚ Stars have found their groove under Belgian coach Luc Eymael and have enjoyed back-to-back away wins in their last two games at Polokwane City (3-2) and Maritzburg United (1-0).

Stars have not won three league matches a row in a long time – since their great escape at the end of the 2014-15 season when they claimed five victories on the trot to avoid what had looked like certain relegation.