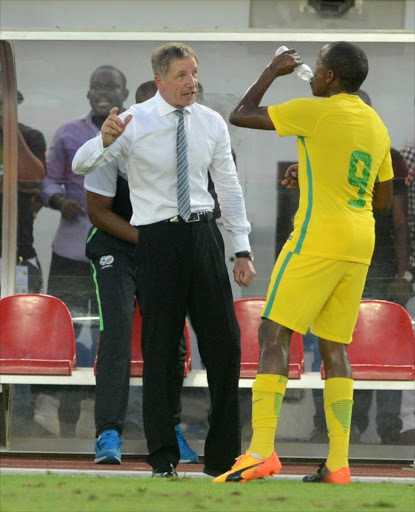 Bafana Bafana coach Stuart Baxter has named a starting lineup that has only been able to retain four players from the previous round for Saturday’s Chan qualifier against Zambia in East London.

Captain and centreback Mario Booysen and left-back Tercious Malepe remain in the defence from the team that beat Botswana 1-0 in the second leg of Bafana’s 3-0 aggregate second round win three weeks ago.

With Saturday’s first leg of this third round tie – the final stage before qualification for the African Nations Championship (Chan) for local-based players – clashing with the 2017-18 season’s kickoff with the MTN8 quarterfinals‚ Baxter’s squad was hit by withdrawals.

Mamelodi Sundowns right-back Asavela Mbekile has a chance to impress having fallen out of favour at his club. Malepe’s South Africa Under-20 and Orlando Pirates teammate Sandile Mthethwa completes the back four‚ partnering Booysen at centreback.

Sundowns’ Sibusiso Khumalo is the third player retained‚ in the midfield‚ where he plays alongside Bidvest Wits’ Jabulani Shongwe‚ Jamie Webber of Stellenbosch FC and Dumisani Zuma of Bloemfontein Celtic.

Ryan Moon‚ a scorer in both legs against Botswana‚ is the fourth player to retain his place. The Kaizer Chiefs striker forms a forward partnership with Baroka FC’s Gift Motupa‚ who scored in the first leg against Botswana.