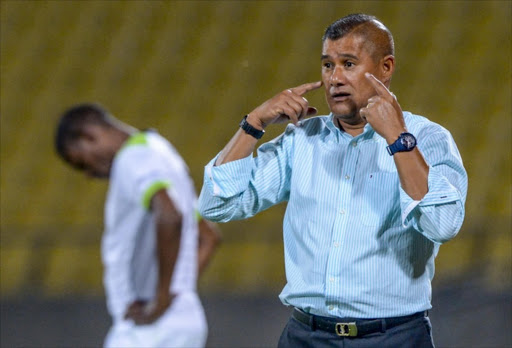 Cavin Johnson flew into Durban on Wednesday morning to begin his new job at AmaZulu‚ going straight to a friendly game organised by the club to get to know his new players.

Johnson had been appointed on Tuesday night in a surprise move by Usuthu as they fired Joey Antipas and brought in the experienced former Platinum Stars and SuperSport United coach with just over a week to the kick off of the new season.

Negotiations had been on-going for a while as Johnson also pondered offers from Baroka FC and Polokwane City.

But taking charge of AmaZulu‚ he said on Wednesday‚ would be an exciting challenge.

“I looked long and hard at the whole layout of AmaZulu and I think it’s a club of great potential‚” he told TimesLIVE as he stepped off the plane at King Shaka Airport.

Johnson‚ 58‚ will have only 10 days to get his new side ready for the start of the new campaign as AmaZulu open their top flight campaign on Saturday August 19 at home to Free State Stars at the King Zwelithini Stadium in Durban.

“That’s going to be the difficult part of the job for me as I must still get to know the players. The best I can do for now is try and understand the players and what they can offer.

"I need to get them on my side. A new broom always sweeps clean at a new club until such time as the players find out the character of the coach. And that’s when you are either broken or you can make it.”

Johnson says priority for AmaZulu‚ who bought their status back in the top flight‚ will be to “survive and create stability”.

AmaZulu released a brief statement on Tuesday‚ announcing the coaching switch but giving no concrete reasons.

It is likely they felt Antipas might not be experienced enough to handle the rigours of the Absa Premiership and Johnson’s acumen at the highest level would serve their cause better.

“We have reached an agreement to terminate their working relationship for the coming season (by) mutual consent‚” the statement said of Antipas and his assistant Prince Matore.

“An announcement regarding the assistant coach role will be made by the end of the week‚” the statement added.

“AmaZulu General Manager Lunga Sokhela has thanked the Zimbabwean pair for their contribution to Usuthu.

“We’d like to wish Mr Antipas and Matore the best of luck in their future endeavors‚ we thank them for their time spent with us‚” the statement added.

Johnson left Platinum Stars on June 1 after they did not renew his contract. He has been replaced at the North West Province club by Peter Butler.

Johnson’s coaching record is 188 matches‚ 77 wins‚ 45 draws and 65 defeats with the top finish of league runners-up in the standings during his first spell at Stars. - TimesLIVE