Khoza admits to problems at Pirates 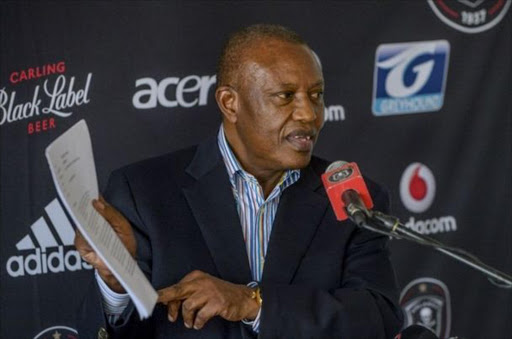 Irvin Khoza does not easily admit to problems at Orlando Pirates‚ but‚ with much deflection and in his own characteristically circuitous manner‚ he did this week.

Announcing a new coach in Milutin ‘Micho’ Sredojevic as the Buccanners aim for a fresh start after their worst season in the PSL era – trophyless and in 11th place in the league – Khoza was grilled on public contention that Pirates’ problems run deeper than their coaches.

He responded that there had been extenuating factors such as the toll taken physically by players from success on the continent‚ reaching the 2013 Champions League and 2015 Confederation Cup finals‚ and the exertion of five more finals domestically.

Perhaps revealingly‚ though‚ Khoza did concede that there are areas in Pirates’ support structure around their technical team that need change.

“Unfortunately nobody has ever come out on the impact of what our travel on the continent has done to the players‚” Khoza said.

“Having won the treble back-to-back‚ then been in four finals internally‚ and a further two on the continent‚ and the traveling (involved) has it’s own affect on the players.

“And that’s why we are looking now at how to reenergise the team.

“But firstly it’s also about discussing it with the coach before we affect those changes‚ because he must also be satisfied with them.

“Because you are putting me at a point where there have been challenges in the team. Never in the history of this team (in the PSL era) have we not been in the top eight. It’s the first time.

“But we are confident‚ with the coach‚ that we should give him our support.

“Unfortunately the nature of our team is such that it builds pressure. Not only from us but also the media‚ for who it is also very important for the team to do well.

“It’s expected to do well. It’s got the history and tradition of doing well.

“But I must say that I’m happy that the league has improved this much‚ that you cannot take things for granted. And if you’re going to be lackadaisical in your approach and preparations you will be punished.

“Teams have been professionalised‚ they all use a lot of analytics. So it’s not easy like before. You must be ahead of the competition.

“So let’s hope that with all the changes that we are going to be affecting‚ and with the input from the coach‚ maybe it will be better than what it is now.”

Bucs’ complex back-room staff structure‚ and the clarity of the role of technical director Stanley ‘Screamer’ Tshabalala‚ have been speculated on as a source of disruption and complication to a coach’s job.

Khoza said a report on the affect of ‘player power’ at Pirates is expected soon.

“The report is there‚ and it’s almost complete. It’s obviously an internal document with some of the things that we have got to deal with.

“Sooner or later there will be a big announcement in the country to take into account some of those things that we have learnt at Pirates‚ which we are sharing now with our colleagues in the league.”