Downs qualify for the last eight 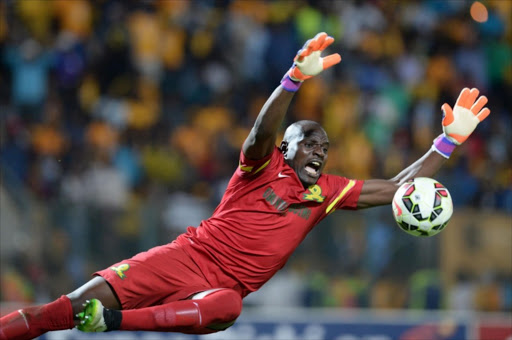 The reigning Africa-based Footballer of the Year Denis Onyango has enjoyed so much success in the last 12 months‚ but has also had a tendency to falter at vital moments. The Sundowns goalkeeper will have to be at his absolute best if Uganda are to make it into the knockout stages. It is also a chance for him to showcase his quality to a global audience after disappointing in last month’s FIFA Club World Cup. Picture credits: Gallo Images

Mamelodi Sundowns have further improved their CAF Champions League record by reaching the quarterfinals for the third time in their history.

The defending champions confirmed their place in the last eight after beating Ethiopian side St George on Saturday, courtesy of a late strike by Anthony Laffor.

They join the likes of Esperance and Etoile du Sahel (both Tunisia), who have confirmed their spots with one round of matches still to play in all four groups.

Sundowns' victory was bitter-sweet for their goalkeeper Denis Onyango, who previously played for the Ethiopians.

Onyango, who saved a penalty while the score was 0-0, said the most important thing for him was ensuring Sundowns' passage to the last eight.

"I worked for St George before, but when I came back it was for Sundowns. I thank the supporters because when I came out for the warm ups they clapped for me. They were welcoming and it was very emotional," Onyango reacted.

"We have the experience (in CAF) and you could see we controlled the ball in the second half. We have players who play for Bafana Bafana, so we controlled," he added.

Group D is led by Zambia's Zanaco who could be Sundowns' opponents in the last eight. Moroccan side Wydad Casablanca are in second spot in the group but Al-Ahly are not out of the picture yet.