Kjell Jonevret's job on the line at Orlando Pirates 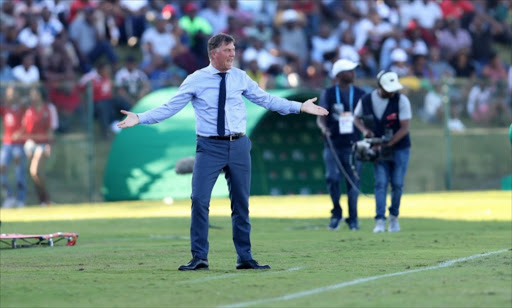 Beleaguered Orlando Pirates coach Kjell Jonevret says he wishes to carry on with the club despite failing to take them into the top eight‚ losing badly in the weekend’s Nedbank Cup final and facing the possibility of the sack just four months into the job.

“I’m hungry‚ I’ve just started this job and I want to have a full season to work with my team‚” said the coach‚ who could be on his way out in the next weeks according to sources close to the club.

Jonevret‚ 54‚ arrived in March with hopes that a firm hand on the wheel might get Pirates back on track after a poor start to the season but in 18 games in charge since February‚ the Swede won six‚ drew seven and lost five.

Although they progressed to the Nedbank Cup final‚ Pirates slumped to 11th in the league standings.

“There were a lot of positive things to take in the season. I think there are a lot of discussions at the office for next seasons.

"But we have to wait and see what will happen. I’m not involved in all decisions. As you could see‚ we have some problems and that’s not just in the cup final.

"I’m 100 percent sure Orlando Pirates will start next season better.

"We will try to forget what has happened and try to be better. But there have been problems for a while‚” added Jonevret in the aftermath of a one-sided 4-1 drubbing at the hands of SuperSport United at the Moses Mabhida Stadium in Durban.

“When I arrived I had hoped that‚ of course‚ it should be … I don’t know if I should say easier … but I hoped that.

"OK‚ we had too many draws but we stabilised the team a bit. And getting to the cup final was something to be happy about at least.

"I have just begun and I hope they (the Pirates management) can listen to me and the other coaches about what we need for the future to be a better team.

“I like the experience here‚ I get a lot of energy from the people who I meet and I can see how much the club means to them.

"I’m ready to work 24 hours a day just to make them happy. But there are a few things missing now to make us better‚” Jonevret added. - TimesLIVE