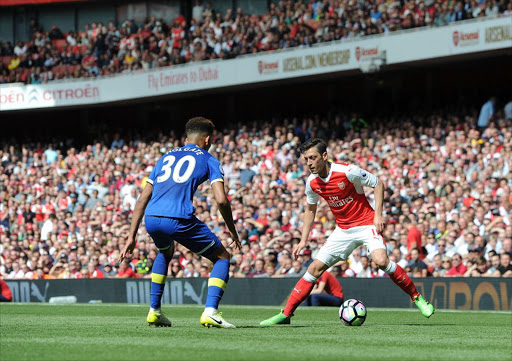 Mesut Ozil of Arsenal takes on Mason Holgate of Everton during the Premier League match between Arsenal and Everton at Emirates Stadium on May 21, 2017 in London, England. (Photo by David Price/Arsenal FC via Getty Images)

Arsenal must focus on keeping Alexis Sanchez and Mesut Ozil at the club before trying to strengthen other areas of the team for next season, goalkeeper Peter Cech has said.

Arsenal’s leading goalscorer Sanchez and playmaker Ozil are out of contract in 2018 and talks on an extension have been put on hold until the end of the season.

“The main thing is we need to keep the team together and try to strengthen it in the areas where the manager would like to, and then we will be ready to go again,” Cech told British media.

Arsenal failed to qualify for the Champions League for the first time in 20 years under manager Arsene Wenger, but Cech said Premier League champions Chelsea had benefited from not being involved in the competition this season.

“If you have one odd year in 20 years, it is not a problem,” said Cech. “I think the club has a strong foundation, a strong organisation and everything to be one-year out and come straight back in, like Chelsea did last season.

“Obviously, it helped them not to be involved this season because they could keep all their energy for the league.” Cech said Arsenal only had themselves to blame for an inconsistent season that led to a fifth-placed finish.

“We have four more points than last season, so in a way you would think that we improve by four points...” Cech added “But unfortunately the other teams ahead of us had a very good season. They managed to get points and we had a few results which didn’t go our way. It was our mistake.” Arsenal play Chelsea the FA Cup final on Saturday.