The men behind Downs' heroics 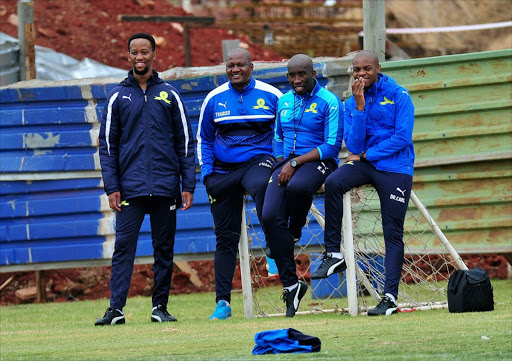 Many have credited Sundowns head coach Pitso Mosimane for the team's successful campaign in Africa, but the man himself has sung the praises of his back-room staff.

Here are some of the men behind Sundowns' success:

The man they call "Mourinho" is Mosimane's right-hand man who has revolutionised the role of assistant coaches. The 30-year-old has come through the ranks at Sundowns since 2011, starting in the development side before moving up to the first team.

His experience on the bench is crucial for Mosimane. Lamontville Golden Arrows played some eye-catching football with Mngqithi at the helm and went on to beat Ajax Cape Town 6-0 in the MTN8 final in 2009.

The 45-year-old can sometimes be seen at stadiums taking notes of the opponents Sundowns are playing next.

The former Moroka Swallows goal-minder is the man responsible for making sure that the club's keepers have remained in top form. He played an important role in the revival of Denis Onyango.

Since Sundowns have been playing non-stop over the months owing to their CAF and domestic commitments, the North West man has been making sure the players maintained their top-notch physical conditions.

"KB", as Rangoaga is known, was recruited by Mosimane in September 2014, and he told the media in the past few weeks that Rangoaga is the "most important member of the team".

Zungu is pretty much a part of the furniture having been with the club since 1989. The 52-year-old started out as a driver and became the kit manager in 1992.

Zungu, who is adored by the players, has been with Sundowns through their ups and downs.

The trio has been providing reports on the opponents as well as video footage. They manage data to monitor trends in team and individual performance.

Nothing has been left to chance and every opponent has been analysed on a regular basis.

Having beefed up their medical team with the likes of Tabane in early 2013, Sundowns' treatment table isn't as busy as it used to be.

Sundowns players can call on this man after a long hard training session or match. Moshane is the massage therapist at the club.