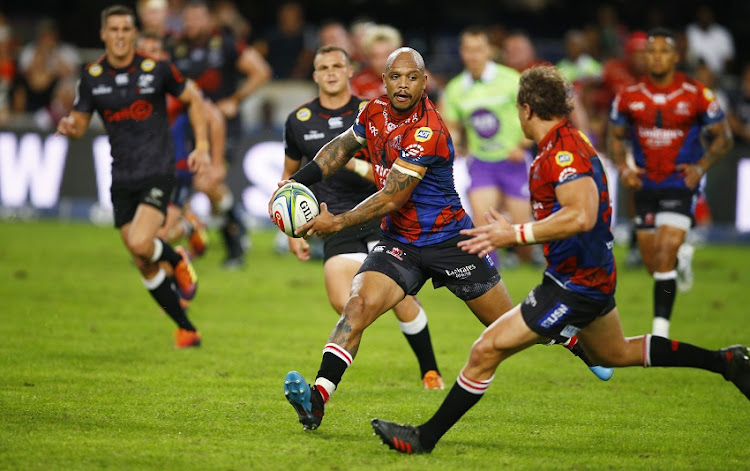 Lionel Mapoe of the Emirates Lions during the Super Rugby match between Cell C Sharks and Emirates Lions at Jonsson Kings Park Stadium on May 25, 2019 in Durban, South Africa.
Image: Steve Haag/Gallo Images

Springboks utility back Lionel Mapoe is expecting a brutal and nail-biting contest against the British and Irish Lions when the two sides face off in the deciding match at the Cape Town Stadium on Saturday.

The three-match series‚ which has seen its fair share of controversy both on and off the field over the two weeks as a result of inconsistent refereeing‚ is level after both sides won a game.

The 32-year-old Mapoe‚ who played for the Kubota Spears in Japan and Stade Français in France before he returned to the Bulls in June‚ is expecting a fiercely contested affair‚ given what is at stake.

“The third and final match should be a cracker with lots of fireworks‚” said Mapoe‚ who represented the Springboks in 14 Tests‚ the Sevens team‚ U20 side and the SA ‘A’ side.

Coach Jacques Nienaber lauded the performance of the leadership in his team as the Springboks convincingly beat the British & Irish Lions 27-9 to ...
Sport
11 months ago

“I will definitely be sitting in front of my television and supporting the boys. I am expecting a brutal and nail-biting contest between two good sides who will be looking to win the series.

The first two matches produced enthralling and at times bloody rugby on the field‚ but there was more drama off the field with both camps talking about the officiating.

“There has definitely been a lot of action on and off the field. The Lions won the first Test match and it was always going to be challenge for the Boks because they went into that match not having played together for a while.

“They showed signs of rustiness but they responded in the best possible way in the second Test with the guys coming into their own. They controlled the match‚ executed the game plan and played the way they wanted to play and they were in charge of the match.

“In that second match‚ the Springboks pulled it through to draw the series level and hopefully they will come up on top.”

Mapoe also explained the reasons he decided to return to South Africa and to the Bulls.

Rassie Erasmus and SA Rugby find themselves in World Rugby's dock over the former's viral video in which he painstakingly took to task the match ...
Sport
11 months ago

“I was out of the country for about two years with my family and with everything that happened with Covid-19‚ we were starting to miss home a little bit. When I was given this opportunity to come up to the Bulls‚ I told my partner let’s do it.

“I was here at the Bulls some years back and I must say it feels different compared to those years ago. The culture has changed but it does feel like home because you can speak to the youngsters‚ there are no egos among the players and we understand each other.”