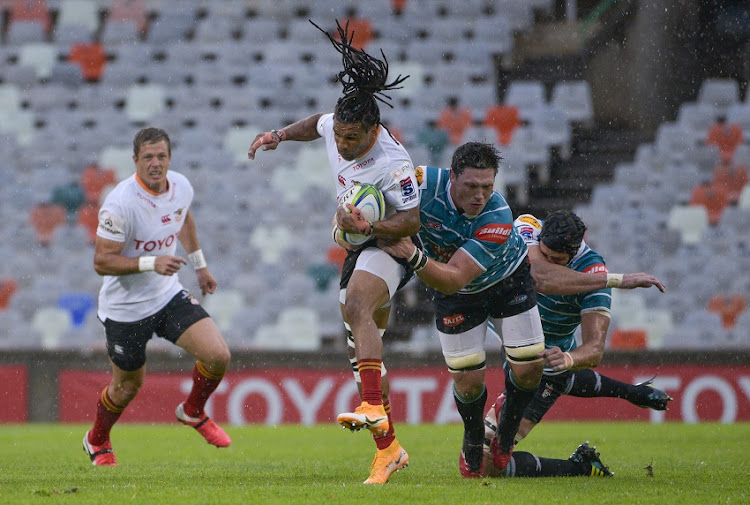 The Cheetahs cleaned up their act in the second half to win this messy Super Rugby Unlocked clash against their westerly, and at times wayward, neighbours.

They beat Griquas 28-9 after keeping the visitors scoreless in the second half.

In wet conditions both teams were prone to error with handling mistakes the order of the day and both teams also treaded water in the set pieces. There was a general failure to master the ball in the line-out, while the soggy underfoot conditions meant the scrums were never a sure-thing.

It was a disjointed clash and it was only around the 50-minute mark that the Cheetahs really asserted themselves. Their forwards were starting to eke out small gains while the their tactical kicking also allowed them to operate in favourable territory.

It were their forwards however that got them nudging forward. For sheer effort few matched

No8 Jeandre Rudolph who was always in the thick of things, although not always to the benefit of the team in white. He frequently impacts play but he also has the propensity to fall on the wrong side of the law.

A little more measured but equally industrious up front was stand in captain Carl Wegner. At the back fullback Clayton Blommetjies was the home team's most assured back. He was steady under the high ball and proved the occasional nuisance to the visitors on attack. So too was left wing Rosko Specman, although given the conditions his opportunities were limited.

The hosts got on the board as early as the third minute when Andisa Ntsila stole what for the longest time appeared to be a try scoring opportunity for left wing Specman.

Those opportunities however proved few and far between, partly because of the conditions but principally the dimensions of Griquas' challenge.

Griquas captain and scrumhalf Zak Burger increasingly widened his range of influence on proceedings in the first half but his impact was not as keenly felt in the second.

With Griquas also struggling to fashion try scoring opportunities it was left to flyhlaf Tinus de Beer to advance his team on the scoreboard in the first half. Both kickers however struggled to master their attempts at goal.

De Beer slotted three penalties in the first half to help give his team a one-point lead at the break.

After Cheetahs' tighthead prop Hencus van Wyk gave away two penalties for collapsing the scrum in the first half, the hosts cleaned up their act in that facet in the second.

Meanwhile imprecision continued to permeate the Griquas game and they never really threatened the Cheetahs' goalline.

The Cheetahs will be relieved with this win. With Super Rugby Unlocked log points carried over into the Currie Cup, the Cheetahs were desperate to keep up their challenge for silverware. Coach Hawies Fourie stated earlier in the week they are aiming for a top two finish in the Currie Cup that will guarantee them home ground advantage in the play-offs.

With this win they stayed in the hunt.