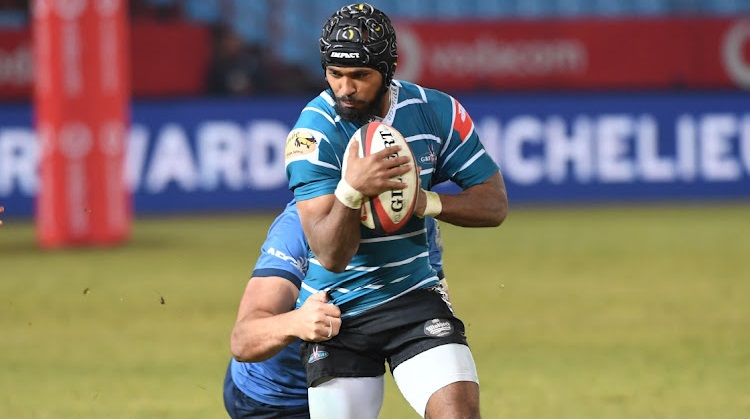 The Griquas and Pumas will face off in a historic Currie Cup final on Saturday at Griqua Park in Kimberley at 3pm. Pumas centre Ali Mgijima believes the final shows that the talent is not only with the big unions.

This final is one of rugby's Cinderella stories in recent years, with two small unions punching above their weight and ousting the traditional top five of the Bulls, Sharks, Cheetahs, Lions and Western Province.

The Pumas, from Mbombela, will be playing in their first final while the Griquas return to the grand stage of rugby's oldest competition for the first time in 50 years.

Mgijima told Sowetan's sister publication the Daily Dispatch at the beginning of the season that they wanted to reach the final. They managed to achieve their objective in spectacular fashion when they defeated the Cheetahs 38-35 in Bloemfontein last week.

“To be honest, it hasn't been an easy journey for us. We've had our ups and downs this season. Nonetheless we have managed to pull through to the final,” said Mgijima.

“We've worked hard to reach our target. The most important thing for us this year was to reach the final. It's a final but it's like any other game.  We are prepared to go all out.

“Our confidence is relatively high after getting a victory at the Cheetahs. On Saturday against the Griquas we are going to go all out, it's a do or die for us,” he said.

Mgijima joined the Pumas in 2020 from the Cheetahs, after his career had stalled at the Free State franchise. At the Pumas he was given a platform to showcase his talent.

Many others have joined the Pumas and Griquas in search of growth and game time. Mgijima believes that this weekend's final will put the talent at the two smaller unions on display and can inspire upcoming players.

“This is a big one. We are not just doing it for ourselves, we are doing it for everyone out there,” said Mgijima.

“Both small unions that are competing against the big unions are in the final. It shows that talent is not just with the big unions, it's out there. Guys need to express themselves and play week in and week out.”

Griquas coach Pieter Bergh is pondering how to use influential pivot George Whitehead in the Currie Cup final against the Pumas.
Sport
3 days ago

Springbok coach Jacques Nienaber has confirmed he will only have a full complement of SA's international-based players on Monday, days ahead of the ...
Sport
3 days ago

With the international Test season about to get under way, Springbok coach Jacques Nienaber wants to use this window to build depth in his squad in ...
Sport
3 days ago

The Junior Springboks have suffered a massive blow ahead of the U20 Six Nations Summer Series in Italy with Bulls utility back Canan Moodie ruled out ...
Sport
5 days ago
Next Article