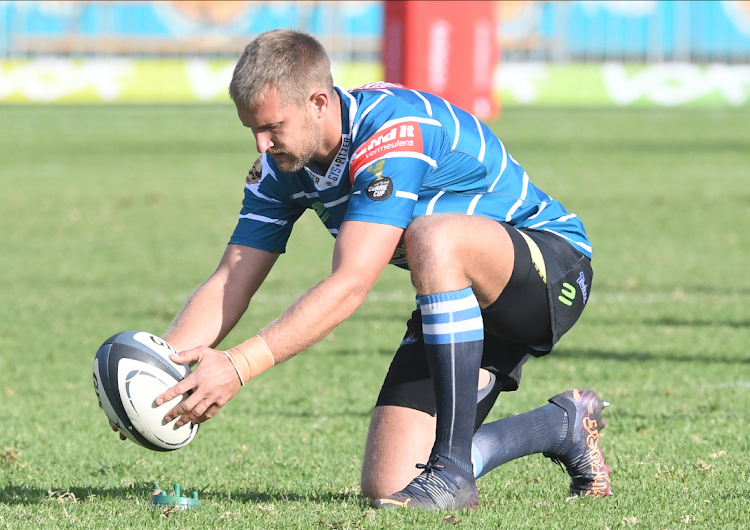 George Whitehead of Griquas during the Currie Cup match against the Lions at Wits Rugby Stadium on April 14 in Johannesburg.
Image: Sydney Seshibedi/Gallo Images

Griquas coach Pieter Bergh is pondering how to use influential pivot George Whitehead in the Currie Cup final against the Pumas.

Griquas will host the men from Nelspruit in the first Currie Cup final between the two franchises at Griqua Park in Kimberley on Saturday (3pm).

The hosts are looking to win their first Currie Cup title in 52 years while the Pumas aim to win the tournament for the first time in their history.

The experienced Whitehead came off the bench against the Bulls in the semifinal in Pretoria and steered Griquas to victory as he scored 18 of the 30 points by his side.

In the build-up to the semis, Bergh has opted to start with Xander du Plessis at flyhalf as Whitehead, 33, plays off the bench.

“I didn’t think George had a good game the previous week [against the Pumas] and Xander was very good against the Cheetahs and I thought it made sense to go back to Xander and Reynhardt [Jonker] at 10 and 12.

"That’s why we didn’t select a scrumhalf on the bench because George’s role was to win us the game at the end.”

The Griquas will host the Pumas in Kimberley on Saturday in a final between two teams that were given little or even no chance at the beginning of ...
Sport
1 week ago

Whitehead’s performance against the Bulls has, however, given Bergh something to think about heading into the final.

“He showed his experience, class and his passion for Griquas,” Bergh said.

“He was under pressure as an individual against the Bulls in the group stages and we replaced him at half time and we did that as well against the Pumas in Nelspruit. I took him off at half-time and he handled that brilliantly.

“I’m very happy for George and we will see with injuries and how we want to play if he will play off the bench again or will have a start.”

Griquas have struggled to make it past the semifinals in recent years. Bergh believes his side has shown this year they have what it takes to win the knockouts as their three games to the final have been must-win fixtures.