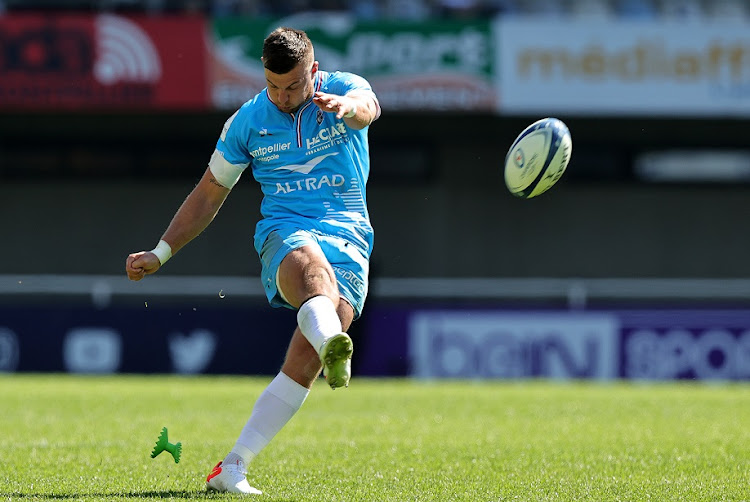 Springbok flyhalf Handre Pollard has a Top 14 final to play for with Montpellier on Friday.
Image: David Rogers/Getty Images

Springbok coach Jacques Nienaber has confirmed he will only have a full complement of SA's international-based players on Monday, days ahead of the start of the three-test series against Wales that begins on July 2.

While Wales coach Wayne Pivac will have been working with his players for close to a month by the time the first Test is played in Pretoria, the Boks have yet to get their preparations for the series fully under way.

Regular starting flyhalf Handré Pollard has a Top 14 final with Montpellier on Friday, while the likes of number eight Jasper Wiese, who was player of the match for Leicester Tigers in the Premiership final on Saturday; scrumhalf Faf de Klerk and lock Lood de Jager have yet to be released by their clubs.

“We don't have any of our Premiership players,” Nienaber said on Tuesday. “According to Regulation 9 from World Rugby they only need to be released a week before the first Test match, so they will join us on Monday.

“We have been fortunate to get our players from Japan. Sometimes a national union and the clubs agree [to release players early] and sometimes they don't.”

The Boks will play in front of their own fans in the Wales series for the first time since they lifted the Rugby World Cup in November 2019, with matches also to be staged in Bloemfontein (July 9) and Cape Town (July 16).

Last year's British & Irish Lions series was played behind closed doors due to the Covid-19 pandemic.

Stadiums in SA may now be filled to 50% of capacity, but a decision will be made by government this week on whether to fully open at 100% with the country having exited its fifth wave of the pandemic.

“It will be phenomenal for us, we've not performed for our country as world champions, so it's going to be massive for us,” Nienaber said.

With the international Test season about to get under way, Springbok coach Jacques Nienaber wants to use this window to build depth in his squad in ...
Sport
3 days ago

The Junior Springboks have suffered a massive blow ahead of the U20 Six Nations Summer Series in Italy with Bulls utility back Canan Moodie ruled out ...
Sport
5 days ago

Bulls coach Jake White cryptically pointed to what was beyond his control in explaining his team's 18-13 defeat to the Stormers in the final of the ...
Sport
6 days ago

Stormers coach John Dobson proudly reflected on his team's triumphant journey to the United Rugby Championship (URC) title but admitted he thought it ...
Sport
6 days ago
Next Article