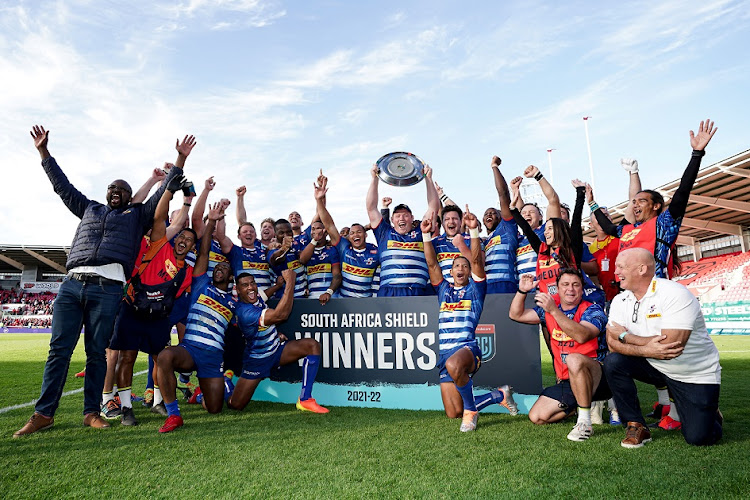 The Stormers celebrate winning the SA Shield of the United Rugby Championship after their match against the Scarlets at Parc y Scarlets in Llanelli, Wales on May 21 2022.
Image: Robbie Stephenson/INPHO/Shutterstock/BackpagePix

The Stormers will host Edinburgh and the Bulls the Sharks in the quarterfinals of the United Rugby Championship (URC) next month.

That was the upshot of a thrilling final round of league matches completed on Friday and Saturday as the line-up for the knockout stages were confirmed.

The Stormers who finished second on the points table after Munster were downed by Leinster's reserve team in Dublin, will host their quarterfinal as well a semifinal should they beat Edinburgh.

They will fancy their chances on home soil against the Scottish outfit. When the teams met earlier in the campaign they played to a 20-20 draw in Edinburgh last October.

The Stormers are, however, a vastly improved side from the one that travelled to the Scottish capital, though one could make the same argument for Mike Blair's team.

The Stormers will be emboldened by the prospect of playing on home soil. While they initially struggled to find their feet at their new Cape Town Stadium base before the start of the URC, they have warmed to their new surrounds since and finished the league stages unbeaten in the Mother City.

While John Dobson and his coaching staff will have much to rejoice about for finishing second given the franchise's troubles off the field and the defections they've suffered in recent times, the Stormers have areas they need to patch up before Edinburgh drop anchor in the Cape.

The Stormers' line-out has been wobbly this season and became a concern in their 26-21 win over the Scarlets. They have, though, been unfortunate with injuries in that department and they may harbour similar concerns at scrumhalf where their depth is severely tested.

That the Stormers finished second on the log given those deficiencies is remarkable but those are areas Edinburgh are likely to probe come the quarterfinal reckoning.

If the Stormers looked a struggling team last October, the Bulls found themselves among the stragglers.

They were 14th on the points table at one stage but like their countrymen steadily marched up the table once they were back on home soil. Their 38-31 victory over the Ospreys on Friday gave them a fighting chance of securing a spot in the top four and so it proved after Munster's defeat.

Their prize is a home quarterfinal against the Sharks, a matchup that might leave director of rugby Jake White with a hint of unease. The Bulls have lost all four derby matches against the other SA teams who have qualified for the knockout stages.

They lost 30-16 to the Sharks in Durban in December, before going down 29-22 to the same team at Loftus Versfeld in February. Their only other home defeat in the URC came against the Stormers who won 30-26.

While the Sharks will feel Loftus is probably the best venue to travel to given the other quarterfinal destinations, they will have to make significant improvements if they are to win in the capital again.

While their scrum packs a punch and they have the ability to seize moments from unstructured play, questions have been raised about their ability to stay the course. They have a star-studded line-up but the Sharks are yet to operate consistently as a unit.

It would, however, be unwise to count them out though as their clashes with the Bulls rarely go according to script.

Home Quarter Final secured ✅
See you in 2 weeks when we take on the Cell C Sharks at Fortress Loftus 💥@Vodacom #URC pic.twitter.com/wblslSahcG

In the other two quarterfinal matchups top-of-the-table Leinster host Glasgow Warriors, who ended the regular season in eighth, while Ulster will host Munster.

Leinster, who play in the Champions Cup final against La Rochelle next week, should by then have no trouble deploying their foremost talent. History favours the home team in the Ulster vs Munster matchup but Johann van Graan's team won 24-17 at Ravenhill in April.

While they are a redoubtable side Munster have had trouble rising to the big occasion as again evidenced recently in their Champions Cup exit at home to Toulouse and Saturday's defeat to a second-string Leinster.

The URC quarterfinals will be played on June 4.