Playoff date at Loftus in the offing 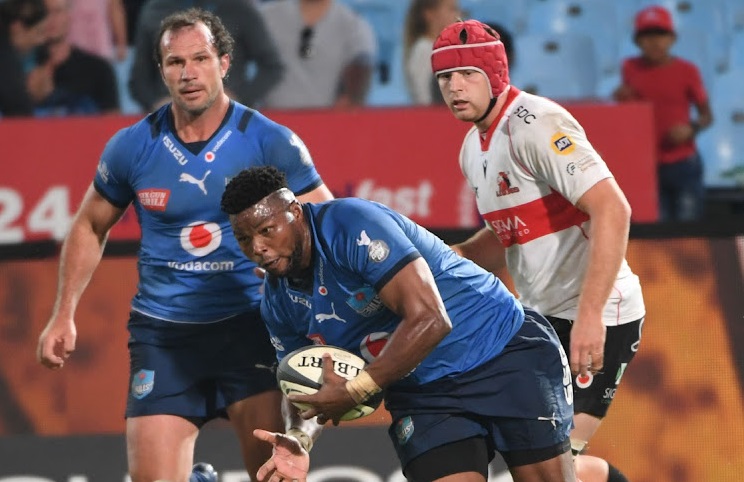 Lizo Gqoboka of the Bulls during the Carling Currie Cup match between Vodacom Bulls and Sigma Lions at Loftus Versfeld on May 14, 2022 in Pretoria.
Image: Lee Warren/Gallo Images

The Lions and Bulls have named strong travelling squads for fixtures in Wales for the final round of the United Rugby Championship.

The Pretoria-based Bulls will be first in action against Ospreys in Swansea's Liberty Stadium on Friday at 9.10pm.

With a spot in the playoffs already secured, their mission in Wales remains crucial as win there will guarantee 6th-placed Bulls a home game in the playoffs, and also give them a chance of finishing in the top four.

The 28-man touring squad will be captained by Marcell Coetzee.

Bulls director of rugby Jake White is anticipating a tough match against the Welsh and wants his side to use the game as a rehearsal for the knockout stages.

“We have an important tour where we will face a dangerous Ospreys team in their own backyard," said White.

"We are at a crucial stage of the competition – the business end of the round-robin stages and on the verge of the playoffs, with plenty to play for in terms of securing home quarterfinal spots.

“Be that as it may, the focus is on playing well as a group this week and to start building good momentum going into the playoffs," he said.

Meanwhile, 11th-placed Lions travel with the knowledge that they have no chance of reaching the playoffs but will be keen to use the game to check the strength of their pipeline.

Head coach Ivan van Rooyen is touring with a young team for the game against the Dragons on Saturday at the Rodney Parade Stadium in Newport (4pm).

He decided to leave behind captain Burger Odendaal, who is set to join English club Wasps,  to give youngsters the experience of touring. Overall, he's happy with the crop of players he's touring with.

"We're quite pleased with the squad we've selected ahead of our final URC match against the Dragons," said Van Rooyen.

"As mentioned last week, it gives us an opportunity as a franchise to cast our eye towards the future, and we believe that the bulk of this group will form part of that core.

"Once again, this approach is in line with our strategy of developing within our structures and some of these names are proof of that.

"In saying that, Dragons will be a tough outfit to play in their own backyard. However, it offers a few of our players an opportunity to impress."

World Rugby has implemented a new trial rule that will prohibits SA Rugby's director of rugby Rassie Erasmus from being a Springbok “water boy” in ...
Sport
1 month ago

The Cheetahs remain unbeaten after powering to their ninth Currie Cup win of the season with a 44-15 victory over the Sharks in Bloemfontein on ...
Sport
1 month ago

Bruised Sharks have a plan to upset the settled Cheetahs

Sharks coach Etienne Fynn says the only way they can get the better of the unbeaten Cheetahs is if they stick to the plan and turn up the heat.
Sport
1 month ago
Next Article