Stormers keep on trucking, but coach eyes the hand brake 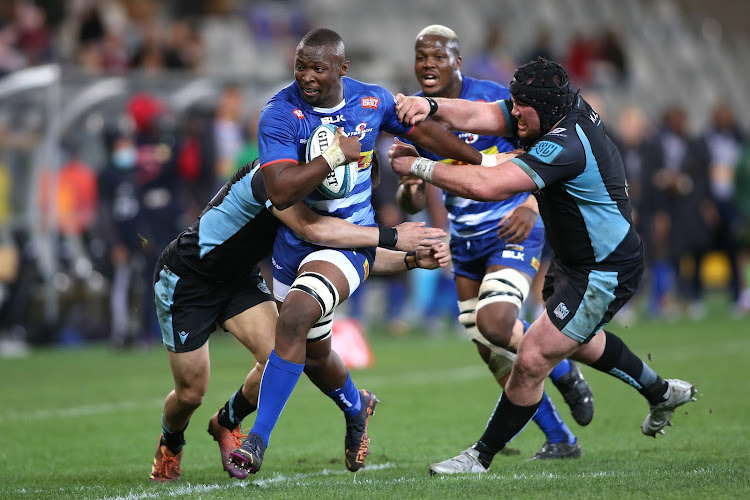 Junior Pokomela of the Stormers tries to get away from Glasgow Warriors players during their United Rugby Championship match at Cape Town Stadium.
Image: Shaun Roy/BackpagePix

There have been seismic shifts, not just in fortunes, but expectations in the United Rugby Championship (URC) this season.

It has presented the Stormers with the not entirely unwanted task of having to manage it as they head into the knockout stages of the cross-continental competition.

Their 20-13 win over Leinster marked not qualification for the knockout stages of the URC and entry into Europe's elite Champions Cup.

Coach John Dobson, however, looked like he had discovered a fly in his ice cream in the immediate aftermath of their hard-earned win.

Sure, the Stormers prevailed over one of Europe's most decorated teams, but Dobson was left with the nagging feeling Leinster will have much more to offer when the business end of the tournament comes around. His team effectively beat a Leinster line-up devoid of their brightest stars, and a confrontation later in the tournament will surely bring more battle-hardened combatants into the fray.

Still, it was a moment for the Stormers to savour. They started from a low base when the URC kicked off, and their first month more or less mirrored the fumbles and foibles of other SA teams in the new competition.

Dobson knows his team will have to find an extra gear if they want to make headway at the business end of the competition.

“Obviously, things didn’t go our way in the first half. It was quite strange and both teams gave away a lot of penalties, so there wasn’t much ball in play. Obviously the first 10 minutes were messy too, with errors on both sides,” Everitt said.

“It was a difficult first 40 for the players to settle in because they couldn’t get into their rhythm, but I suppose half time gave us an opportunity to regroup.

“We spoke about what we needed to do and we also spoke about actions being bigger than words. We had to go out and make it happen the way we had planned during the week.

“It was a pressure game for us and I will give the players a bit of credit there. Maybe the occasion was quite big for them but they certainly settled down well in the second half and got through with the job.”

A bonus point win, while denying the visitors a losing bonus point, would have been a far more satisfactory outcome.

“It did feel a bit anticlimactic,” Dobson said.

“Some of the errors we made, whether that was discipline or at the line-out, we could have got the fourth try.

“I’m not disappointed with the performance or effort. We knew we were going to be in for a hard game.

“Another factor is our own standards. It’s quite a good reflection on this group that has just played Leinster and feeling like we are walking in after a loss.”

It was the Stormers' eighth consecutive win in the competition and with that has come the burden of expectation, even from within. Dobson is more clued up about what his team is capable of and admitted he perhaps overestimated his team's scope and range.

“From my side, I think I made a bit of a coaching error about it being a high-stakes game — those were literally the opening words when I spoke to the team. I am not sure transferring that sort of pressure is healthy.

“My concern as a coach was that they were going to think it is Leinster B. Anybody who has watched them over the years would know they mix and match their teams beautifully.

“I was trying to put pressure on the guys to make sure they realise they were not playing a B side. We felt that pressure today and maybe I felt it. We had a lot to lose and not much to win and I think it reflected in the performance.

“It is tricky as a coach. That is probably one of the things I got wrong this week. I started trying to shift them from just getting to the quarters because I want to push on, but then we start getting carried away with that. It is a challenge for us.”

Dobson said the win was constructive and the Stormers are better for it.

For Leo Cullen, Leinster's coach, it was another opportunity to expose his younger players to the rigours of the challenging competition. They too will be better for it. Some of the young may even crack the nod in bigger engagements in the coming weeks.

“Definitely. We don't have the luxury of drafting players and have to select from within the group. Some of the guys here will feature at Welford Road,” Cullen said about their Champions Cup clash against Leicester Tigers next week.

“Get back and recover as best we can. It is an amazing challenge for us as a group. This has been an opportunity to build depth and get the guys ready. It is important for us.”