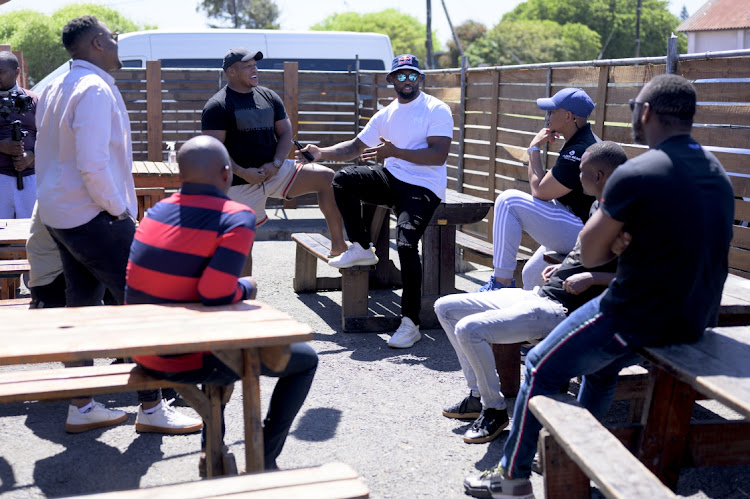 Siya Kolisi shares his story with friends, including fellow Bok Bongi Mbonambi, during the shoot of his documentary which will air on TV tomorrow.
Image: Red Bull Content Pool / Craig Kolesky

Siyamthanda, a TV special featuring some of the most powerful recollections of SA national rugby team captain Siyamthanda “Siya” Kolisi’s earlier life and journey to the top, will air tomorrow on SABC2 (6.30pm).

The 48-minute TV special, which is a co-production between Red Bull Media House and SABC Sport, features people who have made a strong contribution to his life.

Hailing from humble beginnings in Zwide, Eastern Cape, Kolisi had a rough start in life. In this production, he sits down with his close circle of friends and family to chat about his journey from the dusty streets of Zwide, Grey PE and ultimately leading the Springbok team to victory in the 2019 Rugby World Cup.

The rare glimpse into Kolisi’s formative years is hosted by SABC sports presenter Thomas Mlambo, who spent the day with him, his close friends and family, including teammate Bongi Mbonambi, at 50 on Gugs shisanyama in Gugulethu.

The group reminisce and celebrate Kolisi’s journey to the top, unpacking some of their first memories of him. His high school friend Xolisa Velem comments: “Siya was the smallest out of them, biggest ears and his English was zero percent!”

His friends confirm that for the longest time he always dreamt of playing in front of an audience and that they have had the pleasure of watching him achieve everything he told them he would achieve.

The special also touches on the more difficult elements of growing up in the township as well as the pressures of success and the responsibility he assumed when he took on his role as captain of the SA rugby team.

“I’m not perfect but I can’t afford to disappoint society and the young children who look up to me. Representation is everything. I believe in shared leadership; I do not know everything. If I could change anything from when I was a kid, it's mindset. That’s where you either make it or don’t make it,” says Kolisi in the documentary.

Springbok stars Siya Kolisi, Eben Etzebeth, Lukhanyo Am, Makazole Mapimpi and Malcolm Marx have been named in the World Rugby Dream Team of the Year.
Sport
1 month ago
Next Article