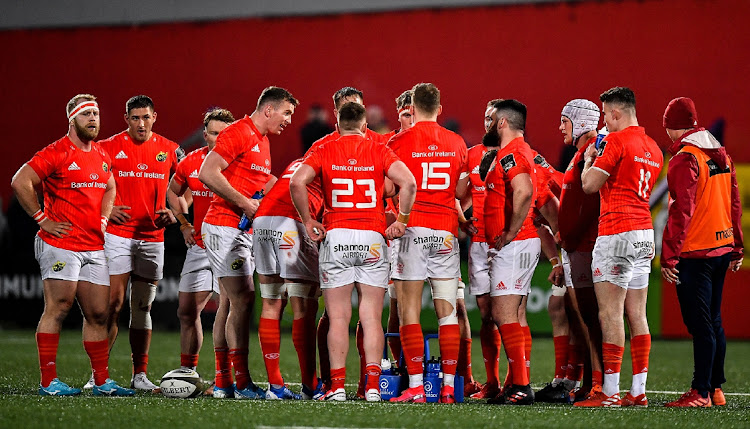 The Munster team huddle during a PRO14 match in Cork last year. Positive Covid-19 tests have bedevilled their plans to travel home from Cape Town over the past few days.
Image: getty Images

Munster's rugby team will have to remain in Cape Town for at least another day after nine more in their touring group returned positive Covid-19 tests.

The Irish outfit in the country for their scheduled United Rugby Championship (URC) clashes against the Bulls and the Lions, said their latest round of PCR testing revealed nine individuals including players and members of staff who have tested positive.

The latest development brings more frustration to the team who had their URC matches in SA postponed after the country was put on a travel red list by the United Kingdom and the European Union after news that local scientists had discovered a new strain of Covid-19.

The team that travelled to SA with an inflated touring squad of 48 was supposed to fly home on a charter flight on Sunday but a positive case in their camp put paid to that.

Scheduled return on Sunday pushed back

Their return flight to Dublin was then pushed back to Tuesday or Wednesday before news emerged of nine more positive cases. The club added that the nine will join the player who tested positive on Sunday in a designated quarantine hotel in the Mother City.

“The remaining party of 38 have all returned negative results and continue to individually isolate in their rooms where they have been based since Sunday night.

“As outlined by the Irish government on Monday, those who have received negative results have clearance to travel from the South African authorities.

“In taking every precaution the touring party has completed another round of PCR testing this morning, the third in less than 60 hours, and will wait on results ahead of next steps.

“The 10 members of the group who have tested positive will remain in Cape Town until the end of their isolation period.  While the individuals were disappointed on receiving the news they are, thankfully, well and will continue to be monitored medically.

“We understand this is a challenging situation and would like to thank families, friends, colleagues and our rugby community for the many messages of best wishes.”

It is hoped the 38 who returned negative tests will fly home in the coming days and complete their isolation at home in time for their Champions Cup away match against Wasps, Sunday week. A week later they host Castres in the same competition.

Competition rules stipulate matches cannot be moved or postponed and if a team fails the honour a fixture they forfeit the match and their opponents are awarded a 28-0 victory.