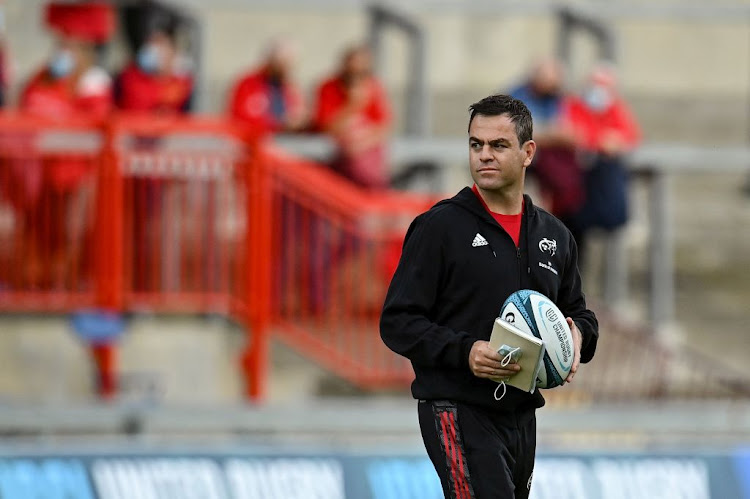 Former Bulls assistant coach Johann van Graan will be back at Loftus - but hoping for a Munster win.
Image: Seb Daly/Gallo Images

On their return to the United Rugby Championship (URC) this weekend, SA's teams will attempt to answer the lingering and weighty question — can they at last make an impact in the competition on home soil?

When the URC took a month-long break to accommodate the November Tests in the northern hemisphere the SA teams, who only announced their arrival in September, had won just four of their 16 matches in the revamped competition. The Stormers, Lions, Sharks and Bulls occupy positions 12, 13, 14 and 15 respectively, having won one match each.

They had struggled to come to terms with different playing styles and surfaces, and Covid-19 and travel-related restrictions, while refereeing interpretations also served to trip them up.

Home ground advantage isn't the only factor that should swing things in the SA teams' favour. They will now be able to deploy their Springboks, who were unavailable in the first month of the competition.

The Stormers perhaps have the easiest path on the road to restoration when they host bottom-placed Zebre. The Bok-laden Sharks meet the Scarlets in steamy Durban, while the Bulls probably face the stiffest hurdle in third-placed Munster at Loftus.

The Lions round off the weekend's action on Sunday with their clash against Cardiff Blues who have 14 Welsh internationals in tour.

The Lions will take on Cardiff with some welcome additions to the team that last played. Former Stormers winger Edwill van der Merwe will make his competition debut for his new franchise and there is a return, albeit on the bench, for utility forward Willem Alberts and utility back Tiaan Swanepoel who both have recovered from long-term knee injuries.

“We are extremely pleased to have a majority fit squad to select from for first home fixture.” said Lions coach Ivan van Rooyen. “Willem and Tiaan missed out on the first four games of our northern hemisphere campaign, so they’ll be raring to go should they get an opportunity,” said the coach.

The Sharks will hope to press home their advantage at Kings Park. Durban's humid conditions will be unfamiliar to the Scarlets who will have to alter their enthusiastic ball-in-hand brand of rugby.

The Sharks are notoriously cautious in their approach when the ball gets greasy in the months of heavy humidity in Durban.

The clash at Loftus will be an eagerly anticipated one in which former Bulls assistant coach Johann van Graan will pit his coaching skills against those of grizzled campaigner Jake White.

Munster's previous experience of playing at rarefied altitude was against the Cheetahs but playing the Bulls at home is a step up in more ways than one.