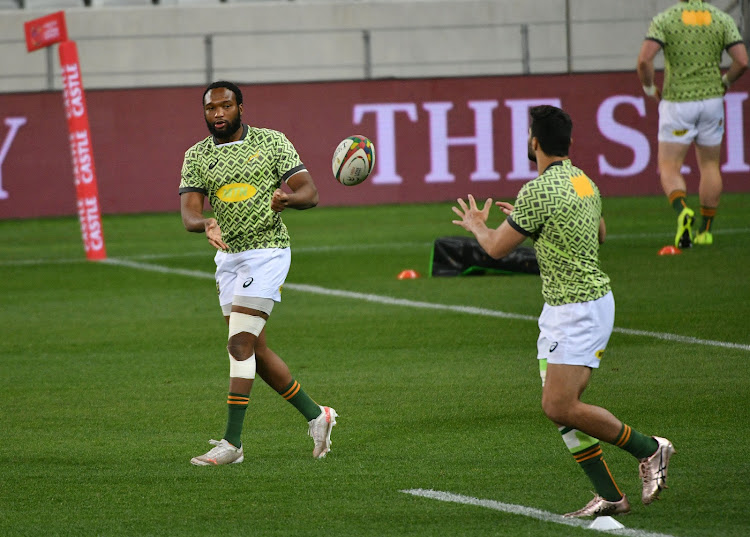 Damian de Allende (right) and Lukhanyo Am have forged an outstanding midfield partnership for the Springboks.
Image: @Springboks/Twitter

Midfielder Damian de Allende has given an insight into his highly regarded on-field centre partnership with Lukhanyo Am that is widely regarded as the best in world rugby.

Over the last two years or so, Am and De Allende, both still under 30, have formed a storming partnership that has helped the Springboks win the Rugby Championship, World Cup and Lions series.

They are once again going to be key when the Boks take on England in Twickenham on Saturday looking to seal their first unbeaten Outgoing Tour since 2013.

SA have already beaten Wales and Scotland, and ending the season with a victory over England will also see Jacques Nienaber’s men retain the number one spot on the world rankings.

“Our communication on the field is exceptional and that helps a lot with having a good understanding of each other,” said De Allende.

“Having a strong relationship helps because every game is different and has its own challenges. We are very composed on the field and we chat a lot. Even though sometimes it doesn’t feel like we are in the game, but we like to get involved.

“We talk to each other so that we are ready for the next moment that comes and if there are opportunities we try to grab them with both hands, whether it is making a big tackle, making a set at the breakdown or launching an attack.

“For the two of us it is just trying to stay in the moment on the field, we just try to stay as prepared as we possibly can for the next opportunity that comes our way.”

De Allende added that the other important factor of their partnership is that they cover each other.

“It is the same when he makes a mistake, I am always there to help and back him up.”

This international season, the Springboks have won nine matches after 13 Tests and De Allende says they are hoping to end the campaign with a win over rivals England.

“When we got together in that first week before the British and Irish Lions, we hadn’t seen each other for a long time since the World Cup but there was a Covid-19 outbreak after the Georgia Test.

“Those few days we came together for the first time were incredible, I have never seen the guys that excited. It was a bit dampening when there was a Covid-19 outbreak after the Georgia Test and we were separated for about two weeks.

“We only started training as a group on the Monday before the first Test against the British and Irish Lions. It has been a challenging year and we have been in the bubble since the Lions tour.

“There was a trip to Australia to complete the Rugby Championship, that was tough for us mentally, but I think as a squad we got together nicely and we won the last match on that tour before we headed home again.

“We are in a bio-bubble again but we need the last push this weekend to end the season on a high and hopefully we can sit down and look back at the year that has just passed and cherish memories that we made together.”