Boks are fussy about experience

A much rearranged back three will take the field against Wales 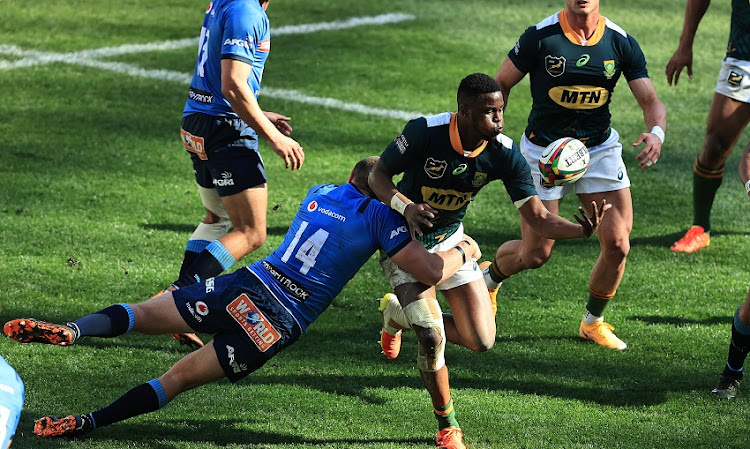 Aphelele Fassi of SA A is tackled by Marco Jansen van Vuren during their match against the Bulls at Cape Town Stadium earlier this year.
Image: David Rogers/Getty Images

Aphelele Fassi's absence from the Springbok team that doesn't contain Willie le Roux or Sbu Nkosi has left many perplexed.

The Springboks will go into Saturday's Test against Wales in Cardiff with Damian Willemse at fullback and Jesse Kriel on the right wing. The Boks have a rearranged back three with Cheslin Kolbe still injured, Nkosi unavailable due to visa issues and Le Roux losing out due to rotation.

The expectation, however, was that Fassi, a player capable of operating across the back three, would be handed either the No 14 or No 15 jersey in his second Test.

He failed to secure a position in the match day 23 with Frans Steyn wearing the No 23 jersey among the substitutes.

Head coach Jacques Nienaber sought to explain the omission of a player who doesn't just have immense promise, but has started delivering on it domestically.

“Jesse played wing for us before, so it’s not an experiment,” Nienaber said.

“We’ve seen what he can do when he started at wing against the All Blacks in 2018 in Wellington,” said Nienaber about the Springboks' dramatic 36-34 win in the New Zealand capital.

Kriel no stranger to back three

“Furthermore with the rotation at fullback, Jesse with his 49 Test caps brings in some organisational skills and experience. He has also been training really well,” explained the coach.

Had Fassi cracked the nod ahead of Kriel, the Bok back three would have had 37 caps between them. With Kriel in the team it boasts 70.

Nienaber and predecessor Rassie Erasmus have a particular aversion to fielding a back three they deem to fall short on the Test cap count.

Without Le Roux who has 70 Tests, they were always going to find a player who can bolster the Test cap count in the back three even if it isn't necessarily directly relevant experience. The only other occasion Kriel filled the Bok No 14 jersey was against Argentina in 2015.

With Le Roux on the basis of his rotation with Willemse likely to return to fullback next week and Nkosi possibly taking possession of a passport that can accommodate a visa in time for the Murrayfiled clash, Fassi might miss out again.

In their last game the Boks will likely go with all the experience they can muster against England, said to be their toughest assignment on tour.

“If all goes according to plan there might be an opportunity for Fassi,” said Nienaber.

“We as coaches have a specific plan in mind for these three games but with rugby, the ball is not round, it is oval so you get weird bounces sometimes. Thus, we will never say never. He has a specific skill set and attributes that he brings to the party\ so it was an extremely tough decision,”

The coach admitted Fassi was disappointed

“We are open and hones. There are no one-on-ones. We literally do the team selection and explanations in front of everybody.

“He was a bit disappointed, but is looking forward to helping the match day 23.”

Wales have suffered significant injury blows with captain Alun Wyn Jones ruled out of all the November Tests, along with loose forward Ross Moriarty. They suffered shoulder injuries in last weekend's 54-16 defeat to New Zealand.

Also ruled out is No 8 Taulupe Faletau who has an ankle injury. All three are significant contributors to the Wales pack and their absence will significantly dent Wales' chances on Saturday.