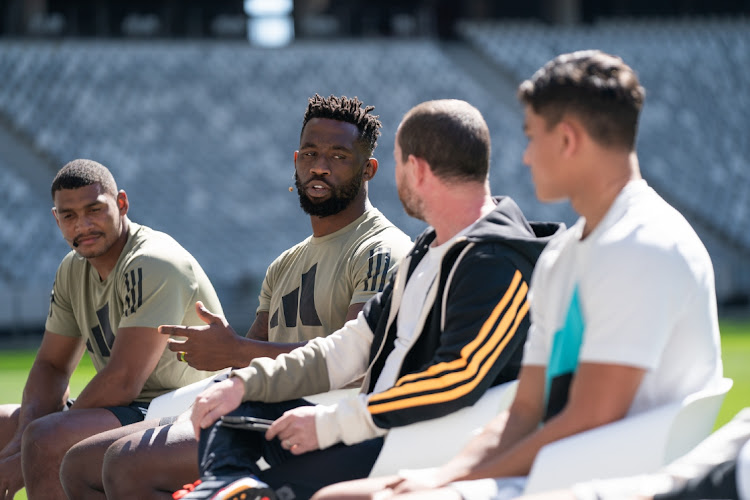 Springbok captain Siya Kolisi spearheaded the Impossible is Nothing campaign at an Adidas event in Cape Town this week, where the stories of 15 other SA athletes were shared.

“Impossible Is Nothing is about seeing possibilities on and off the field of play, perceiving the world not as it is, but as it can be – and inspiring others to do the same,” the apparel maker said.

The event was held at the Cape Town Stadium on Tuesday for athletes to share anecdotes about pursuing their dreams with rebellious optimism, and encouraging the next generation to do the same.

Kolisi spoke about his recently launched book, Rise, as well as the work of the Kolisi Foundation and how the national team bounced back with an epic win over the All Blacks during the Rugby Championship last weekend in Australia.

“South Africans have a strong connection with rugby, so there is a lot of pressure. It [the tour] was tough on us mentally but we pulled together even when we had our backs against the wall,” the Boks skipper said of having to stay in a bio-bubble for months on end, before defeating the All Blacks in their final tour match last week.

Kolisi shared that it was his family and his work at the Kolisi Foundation that kept him motivated. “I don’t think too much about my achievements but rather what can be done on and off the field to make South Africa a better place for generations to come. I don't want future generations to struggle the way I did, worrying about water bottles or kit. Those things must be sorted out so that you can focus on becoming a better player.”

Wade, who is 18 years old, is in the national under-20 squad. “No matter what you face in life you can overcome any obstacle if you’re willing to sacrifice and work hard for it. I’ve refused to let any adversity stop me from fulfilling my dream and will continue to push boundaries to see how far I can go,” she said.

Taiwe, 15, plays in the national U-17 team and is focused on her goal. “No matter how hard situations are, you need to keep your head high, have faith because you never know if your time is going to be today or tomorrow,” she said.

South African teams’ terrible start to the new United Rugby Championship has been an eye-opener for the game in the country, leaving the competing ...
Sport
1 week ago

Sharks utility back Curwin Bosch has not given up hope of returning to the Springboks, even though the flyhalf and fullback positions are now fully ...
Sport
1 week ago

Nienaber praises replacements for excellent job against All Blacks

Springbok coach Jacques Nienaber gave credit to the replacements who were introduced during the game and played a crucial role in the Rugby ...
Sport
1 week ago

New Zealand coach Ian Foster said he has more immediate concerns than the next Rugby World Cup but believes his All Blacks have learned lessons from ...
Sport
1 week ago
Next Article