Nienaber praises replacements for excellent job against All Blacks 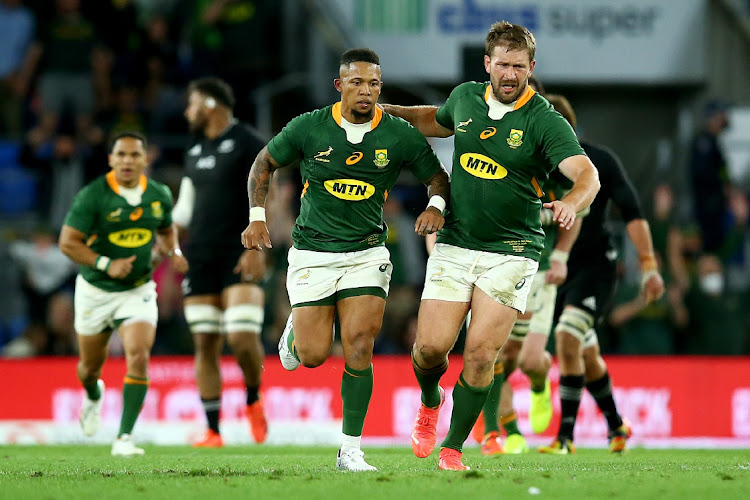 Elton Jantjies of the Spingboks kicks a field goal during The Rugby Championship match between the South Africa Springboks and New Zealand All Blacks at Cbus Super Stadium on October 02, 2021 in Gold Coast, Australia.
Image: Jono Searle/Getty Images

Springbok coach Jacques Nienaber gave credit to the replacements who were introduced during the game and played a crucial role in the Rugby Championship victory.

Other replacements who played an important role in the victory were Elton Jantjies, who replaced a concussed Sbu Nkosi, and veteran Frans Steyn who was introduced for Willie le Roux.

Kitshoff, Marx and Koch were industrious, Steyn’s long-range kicking was effective but the most significant contributor was Jantjies who had a hand in Makazole Mapimpi’s try. He scored the crucial late drop goal and kicked the winning penalty.

Nienaber, who was happy to see the Boks snap a three-match losing streak in the tournament, said the substitutes made the difference in what turned out to be an absorbing and see-saw affair in the Gold Coast, Australia.

“As I mentioned last week, I wanted to use Elton but then had the injury to Marco van Staden which prevented that as we might have finished the game with 14 players (if Van Staden’s injury worsened),” said Nienaber after the match that denied the All Blacks six out of six victories.

“This time I decided to use them much earlier and I think we were doing much better [on Saturday] in that regard. Elton was awesome when he came on and Frans Steyn was brilliant.

“Willie did some good things and did make some mistakes, but I wanted to bring in Frans for the 50/22 kicks. He trained well with us and did very well when called upon.”

Asked to reflect on his match-winning penalty, Jantjies said he didn’t feel any pressure.

“With the last kick, I think we actually celebrated a bit too early but it was straightforward and I didn’t feel any pressure on me. It was just about going through my usual routine and making sure that I kicked it over,” said Jantjies.

Nienaber also explained the reasons behind the decision to replace the front row before halftime.

“We see them as a combination and the minutes played will never be the same. The moment we felt the first group has done their job, we will bring on the second group,” said Nienaber.

“[On Saturday] they emptied their tanks after 38 minutes and I replaced them when they did their job. After last week, I decided we should make use of our subs and I thought they were all excellent.”

Nienaber added that they carried the ball better than they had in last weekend’s two-point loss because the All Blacks offered more space.

“You can play only what is offered and where there are spaces,” he said.

“They dropped back a bit this time around and we had more space to keep the ball. We are looking for the balance between our running game and kicking game.

“We had opportunities last week, which we did not use well. This time around it was better. The truth of the matter is, we are not yet where we were as a team in 2019. Not playing in 2020 has affected us but we are growing and getting back to that standard. The November tour will be another opportunity to grow as a team.

With the Rugby Championship over, the Boks have a two-week break before they go at it again in the end of year tour where they are scheduled to play against Wales (November 6), Scotland (November 13) and England (November 20).

New Zealand coach Ian Foster said he has more immediate concerns than the next Rugby World Cup but believes his All Blacks have learned lessons from ...
Sport
3 weeks ago

Boks restore pride with last-gasp win over the All Blacks

South Africa restored some pride with a last-gasp 31-29 win over rivals New Zealand in their absorbing and see-saw Rugby Championship clash at Cbus ...
Sport
3 weeks ago

All Blacks captain Ardie Savea said he may have to "put pressure" on the referee in Saturday's Rugby Championship clash with South Africa to stop the ...
Sport
3 weeks ago
Next Article