Lions go with unchanged team for clash against the Scarlets 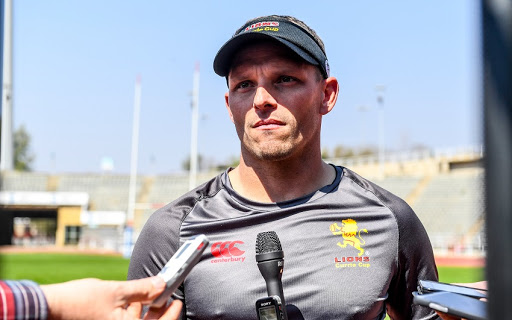 The Lions' adaptability was always going to be put to the test in their four matches away at the start of the United Rugby Championship (URC).

While they overcame the hurdle Zebre presented last weekend, they will on Friday face a team and conditions that are vastly different.

They play the free spirited Scarlets in Llanelli in what are set to be testing conditions. The Parc y Scarlets surface should hold up well but Lions captain Burger Odendaal expects an arm wrestle in a game of tight margins.

“Our decisionmakers need to get us in the right areas and the game management is going to be very important. You don't want to be stuck in your half trying to play and get a couple of unforced errors.

“It is going to challenge our kicking game a bit.”

Kicking game has to be spot on

It means rookie flyhalf Jordan Hendrikse's kicking game will likely come under the stiffest examination yet, but in Andre Warner he has a scrumhalf who will considerably ease his load.

The Lions can prepare for a grinding contest, which is a skill they will need to quickly develop if they are going to be a team to contend with in the URC.

The Lions go into the clash with an unchanged team after their 38-26 win in Treviso last week.

Although the Scarlets have 13 players missing through injury, Van Rooyen is still expecting a searching examination of his team's skill set and temperament.

“Apart from the fact that three quarters of their team is made up of Welsh internationals, they also have a couple of British and Irish Lions in their squad,” remarked the coach.

Six internationals, however, count among the injured but Van Rooyen warned of a team with a strong attacking instinct.

“They express themselves through the way they attack. They have great attacking systems. They play with a lot of X-factor and individual brilliance. They have a team that gets energy from a great attacking brand. They have quality halfbacks and have a good kicking game as well.”

Given the expected inclement conditions, the Scarlets may have to rely more heavily on the latter. That won't faze the Lions who will not shy away from a match contested at close quarters.

“It is an area where we have consistently grown over the last couple of months,” said Van Rooyen. “We also want to get a lot of energy from our set piece. Albert (van den Berg, forwards coach) and Julian (Redelinghuys, scrum coach) have worked the last few weeks to get that as consistent as possible. We pride ourselves in our set piece. We want to be competitive there.”

Van Rooyen described the expected weather conditions as “grey, wet and windy”. “It is raining and quite cold, it will be a nice physical battle,” said the coach.

“We actually said it was going to be the same as playing at Newlands,” remarked Lions captain Burger Odendaal.

Conditions to have huge impact on game

“Its going to make the game more 50/50 for me. It is not going to favour either side. If we get rainy, windy conditions our forwards are really going to make a step up,” predicted Odendaal.

One week on from their opening match on tour the Lions will hope to deliver a more sustained effort across the 80 minutes. They fell away in the second half last week but are hoping to keep up their forward grunt.

Springbok flank Jaco Kriel, who returned from a long injury layoff last week, can expect to get more game time this week. “We'll give him 50 or 60 minutes against the Scarlets,” said Van Rooyen.