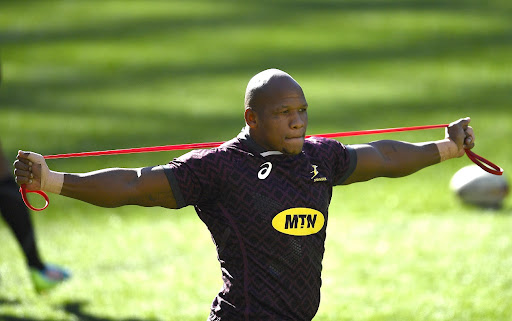 Hooker Bongi Mbonambi wants the Springboks to block out the noise of their 100th Test meeting with the All Blacks.
Image: Ashley Vlotman/Gallo Images

Springbok hooker Bongi Mbonambi has urged his teammates not to be consumed by the hype of the 100th meeting between New Zealand and South Africa in Townsville on Saturday.

Important Rugby Championship points and bragging rights are at stake but there is the added importance of their 100th Test meeting with the All Blacks seeking to increase their dominance over the Springboks.

Since the first meeting of their storied rivalry in 1921, the All Blacks have prevailed 59 times with the Springboks coming out on top on 36 occasions while the other four matches ended in draws.

The All Blacks go into this clash as overwhelming favourites having won eight of the last ten matches between the two sides but their last Rugby Championship match ended in a breathtaking 16-16 draw.

The All Blacks won their last match during the pool stages of the 2019 World Cup but the Springboks went all the way on to lift the Webb Ellis Cup by beating other bitter rivals England.

“To back exactly what coach Deon has said, the rivalry between South Africa and New Zealand will always be massive. It is a massive milestone for World rugby in itself, but we just have to focus on ourselves and keep doing what we have been doing for the whole week in preparations.”

South Africa assistant coach Deon Davids added that the players must not allow the occasion to influence their performance.

“We understand that there is big rivalry between South Africa and New Zealand and we respect that. But we have also learned from the past that milestones can influence your performances.  For us, the only focus is on the next performance and that is important for us for these coming weeks.”

Over the past few months, the Springboks have played eight Test matches against Georgia (1), British and Irish Lions (3), Argentina (2) and Australia (2)  and Mbonambi says they have to keep on going.

“Personally, there have been a lot of games played but we are all professionals in the set-up and we take it day by day and week by week. We know that over the past two weeks results have not gone our way but we have put that beyond us now and we are focusing on the next challenge ahead of us.”