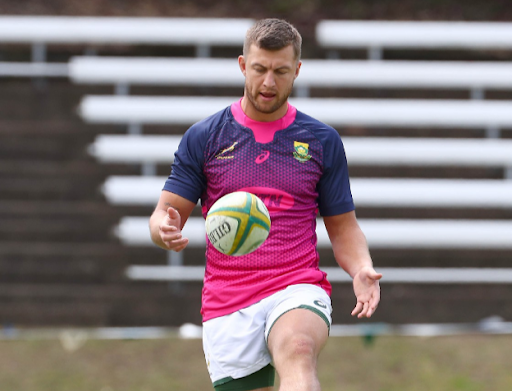 Springbok flyhalf Handre Pollard will be looking for a better kicking performance in the second match against Australia in Brisbane.
Image: Image: Tertius Pickard/Gallo Images

Springbok assistant coach Mzwandile Stick has come to the defence of Handrè Pollard, who was heavily criticised for his poor kicking display during the 28-26 loss to Australia in the Rugby Championship last weekend.

Pollard and substitute Damian Willemse came under fire from certain sections of the Bok fans for their unsatisfactory placekicking but Stick said they are human beings who had an off day and there is no need for panic.

“Once again, you have mentioned that Handrè didn’t have his best game when it comes to the kicking but we didn’t lose the game because of that,” said Stick during the captain’s pre-match press conference with Siya Kolisi at their base in Brisbane for the second Rugby Championship clash against Australia on Saturday.

“I think the discipline let us down on the day. Polly (Pollard) has been brilliant for us since 2018 where he was always up there. At the end of the day we are all human and sometimes you are going to have an off day.

“It's not only him — as a team, the coaching staff and as the leadership, we have to look at ourselves. With Damian, we know that he is a brilliant player and he’s got a lot of coming days in his future where he is going to get better as a person.

“We didn’t lose the game because of the guys who were kicking for poles and that is something that as coaches we understand.”

Stick also defended their continued decision to use the 6-2 replacements split where Herschel Jantjies and Damian Willemse will provide cover in the backline.

“One of the main things that we have is continuity in team selection. We believe in the 6-2 split on the bench and it has worked for us, and there is no need to doubt and panic. Hopefully this week things will go well and the results will be on our side.

“It’s a week in, week out story when it comes to team selection. When we select there is always huge debate.

“It’s not only this week that we had to debate a 6-2 or 5-3 split on the bench — that is something that we as coaches normally go pound for pound in the boardroom and it is nothing new to us as coaches.”

Kolisi said the Boks go into their back-to-back second clash against the Wallabies aiming to get their first win of the overseas leg of the Rugby Championship.

“We watched the last game and we know where we went wrong. It was very upsetting to lose like that but we have looked at the mistakes we made and there were some of the things that we usually bring to the game and we didn’t.

“We are not approaching the match against the Wallabies with desperation, we are more determined this weekend. We have worked hard on what we needed to do and individually we have sat and watched the game and we looked at simple errors we committed and we will be looking to correct.

“Australia played well and I want to give credit to them but I think we can be much better this weekend, and we will.”