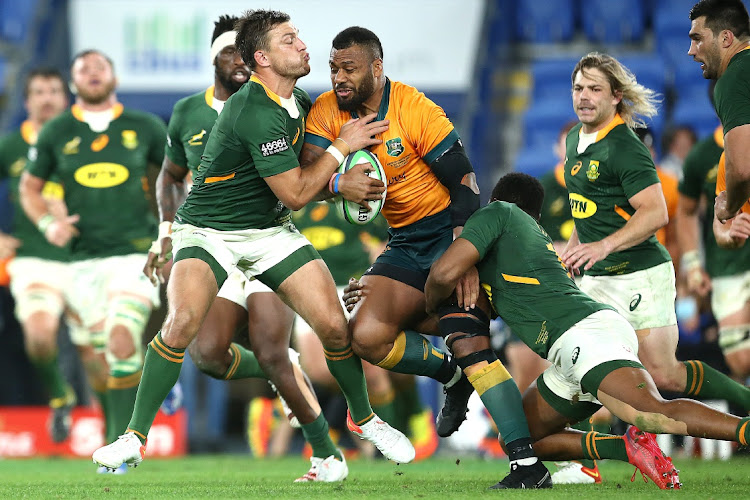 Samu Kerevi of the Wallabies makes a run during the Rugby Championship match between the South Africa Springboks and the Australian Wallabies at Cbus Super Stadium on September 12, 2021 in Gold Coast, Australia.
Image: Jono Searle

Melbourne – Flyhalf Quade Cooper celebrated his first Test in four years by slotting a penalty after the siren that gave the Wallabies a tense 28-26 win over SA in their Rugby Championship match on the Gold Coast yesterday.

Cooper struck the ball sweetly from 40m out on an angle, splitting the middle of the posts after scrumhalf Nic White won the late penalty by poaching the ball from the Springboks' scrum in a nerve-racking finish.

Cooper racked up 23 points, slotting seven penalties and a conversion in a laser-sharp match, with Andrew Kellaway scoring the lone try for the Wallabies in the 17th minute.

The Springboks scored all three of their tries from line-out drives, with Malcolm Marx grabbing a brace of five-pointers, his second nosing the world champions in front with eight minutes left.

After referee Luke Pearce awarded the Wallabies the last shot on goal, it was a toss-up between Cooper and teammate Reece Hodge, who has the longer boot of the two.

“The first thing was I looked up and I had a kick from a similar spot just before that and I only just had the legs to get it over,” Cooper said.

“I had a little chat to myself and said, 'is this your ego that wants you to take it? Your peers are backing you, you've got to be back yourself as well'.”

The Wallabies claimed their first win of the tournament after back-to-back thrashings by the All Blacks at Eden Park and in Perth.

SA fell to their first defeat after winning their opening two matches against Argentina.

The biggest winning margin ever in a Currie Cup final capped a near perfect season for the Blue Bulls.
Sport
6 days ago

Captain Siya Kolisi says South Africa’s "Bomb Squad" is ready to explode against Australia in their Rugby Championship clash at the Gold Coast on ...
Sport
1 week ago
Next Article