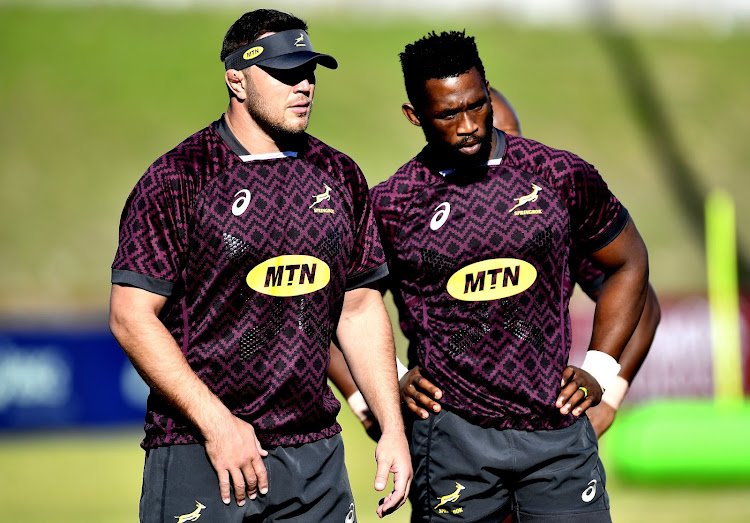 Captain Siya Kolisi says South Africa’s "Bomb Squad" is ready to explode against Australia in their Rugby Championship clash at the Gold Coast on Sunday after the Springboks returned to a 6-2 split between forwards and backs on their bench.

The Boks used their replacements to great effect in winning the Rugby World Cup in 2019, bringing on powerful forwards in the second half - nicknamed the "Bomb Squad" - that allowed the team to keep up their physical intensity through the 80 minutes.

It is an unusual combination among the replacements and the side have opted for the extra backline player in recent times, but against an Australia team that will look to run at them and keep the forwards moving across the pitch, coach Jacques Nienaber has returned to the World Cup masterplan.

"It lets the forwards know we can 'go'," Kolisi told reporters on Saturday. "That is what the coaches want from us, empty your tank. Just leave everything out there, there is no reason to hold back because there is someone who can come in at any time.

"I’ve been taken off after 60 minutes in some games, it doesn’t matter who you are, once the tank is empty the coaches make the decision to pull you off. We want to make sure we have intensity from the beginning to the end."

Kolisi’s battle with Australia captain Michael Hooper at the breakdown will be a key area of interest as they seek to starve the home side of quick ball to unleash their backs and recalled flyhalf Quade Cooper.

"We are hunting them down as a team, there are a lot of guys who put their hands in the breakdown and we know it is one of Michael Hooper’s strong points, he is really good at that. It is my job also.

"We have worked hard at the breakdown as a team and we will make sure that everybody that has an opportunity to clean (out the opposition) gets there on time. Every single breakdown will be a competition and we have a number of stealers in our team."

The match will be a clash of styles between the Boks’ forward-based approach with tactical kicking and the free-flowing ball-in-hand tactics from the Wallabies.

"It’s our plan versus their plan and we know how they play. We don’t hide away from it, we do kick a lot of ball and they attack a lot with ball in hand. It is all about whose plan is better, that’s why we call it a test match."