Faf De Klerk: Boks 'under no illusions about what a great team Wallabies are' 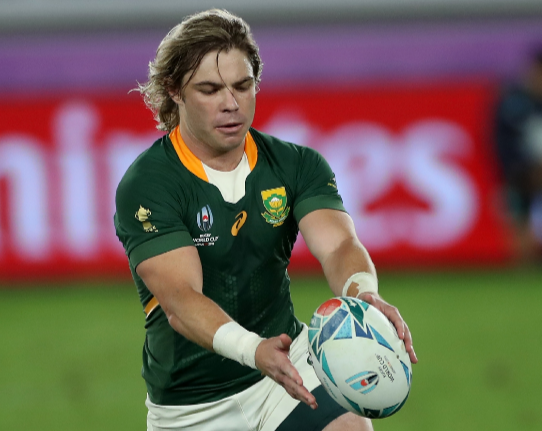 Faf de Klerk has been highly diplomatic in his appraisal of the struggling Wallabies. Here he is in action in the Rugby World Cup 2019 final against England at International Stadium Yokohama in 2019.
Image: GETTY IMAGES

Wallaby fans may be wallowing in their team's recent foible frenzy against the All Blacks but Springbok scrumhalf Faf de Klerk has given them hope.

De Klerk, who has recovered from a leg injury and is returning to the starting line-up for Sunday's Rugby Championship Test in Gold Coast, believes Dave Rennie's team shouldn't be solely judged on their results.

The Wallabies, who only narrowly won a three-Test series against what was effectively a third-string French team earlier this year, have since lost three in a row against the All Blacks.

Though they have played with a lot of intent on attack they have been beset by errors and have been devoid of composure when needed most.

“We are under no illusions about what a great team the Wallabies are,” said De Klerk, who if one existed, may be in line for a Nobel prize in diplomacy.

He believes the pendulum may not have swung so decisively in favour of the All Blacks had the Wallabies made a couple of passes stick.

“Having watched their games and how close they have come to winning some of them, I think if a few things had gone their way and a few passes stuck there could have been different results.”

Wallabies have been redoubtable on home soil against the Boks

His experience of playing the Wallabies in Australia has been largely one of hardship. The Boks have failed to win their last five clashes there. “It is incredibly tough and it’s always a massive physical challenge. They are a bunch of proud guys from a proud country, so I think they’ll come out with everything they have.

“We know we are going to get the best out of them, and we know that if we don’t bring our best, we’ll probably get a hiding in this game.

“We’ve spoken about it a lot this week, and the guys are ready for what lies ahead. We know it won’t be easy.”

Sunday's Test will be one that will feature teams with contrasting styles. The Boks have been emboldened in their uncomplicated, direct forward-based game that also places a high premium on aerial skills.

The Wallabies prefer the ball in their possession and are unlikely to go to the boot as often as the Boks in their efforts to make headway.

“The way they play these days, where they almost try to run you off your feet, is going to test us defensively,” noted De Klerk.

De Klerk, of course, is central to the Springboks' kicking game. It helps bring favourable field position while his box kicks are aimed at heaping pressure on the opposition.

“What I’d like to bring to the field is the game management side of things, so deciding when to have a go and when to take them on in the air, as well as when to speed up the game, so that is the control I need to bring,” said De Klerk.

In Tate McDermott, the Wallabies scrumhalf, De Klerk has an adversary who is hard to pin down. McDermott is particularly adept at finding gaps in confined spaces.

“McDermott is an exciting young player, who is really threatening around the rucks and he is a good player to watch,” said De Klerk.

“That’s the kind of guy Australia want now — someone who poses a threat. Nic White backing him up also presents a massive challenge for us on defence.”