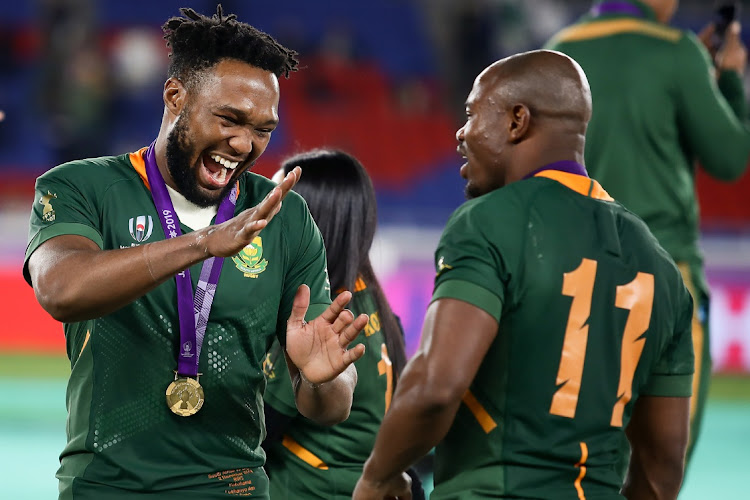 Springboks outside centre Lukhanyo Am said the world champions will not underestimate the Wallabies in the Rugby Championship on Sunday when they go for a first win on Australian soil in eight years.

The teams did not play each other in 2020 due to the Covid-19 pandemic, the first time they had not met in a season since 1994.

The Springboks recently saw off the British & Irish Lions and claimed two comfortable wins over Argentina, while Australia have slipped to three successive losses to New Zealand.

But Am said they cannot read anything into the results and would be taking nothing for granted on the Gold Coast.

"If you look at how the Wallabies have played, they've been beaten because of errors they've made," Am told reporters. "It's not a team you can underestimate; you have to stay completely focused when playing against them.

"If you're not, they could punish you. We've been preparing the best we can for this game these past two weeks because we know the Boks' struggles in beating the Wallabies in Australia."

"There's not even a tiny bit of disrespect on our side. We know we are in for a battle," Am added.

Much is made of South Africa's prowess in the forwards but Am said they have an equally potent backline, particularly his centres partnership with Damian de Allende.

"We've been blessed in South Africa for having great backline players, especially centres," he said.

"Our generation has taken over that responsibility, and I think we're doing a fairly good job, and we definitely strive to do better at all times.

"I've played with Doogz (De Allende) for just over two years and we've learnt and fed off each other."

The Springboks will be without dangerous wing Cheslin Kolbe due to a leg injury.

Imposing Springboks No 8 Duane Vermeulen will return to the starting line-up for the first time since the 2019 Rugby World Cup final when South ...
Sport
4 months ago

Stick not stung by criticism

Rested and in-form Boks, minus Rassie, jet over to Australia for Rugby Championship showdown

A refreshed Springboks side left for Australia on Thursday morning without Rassie Erasmus for the away leg of the Rugby Championship determined to ...
Sport
5 months ago
Next Article