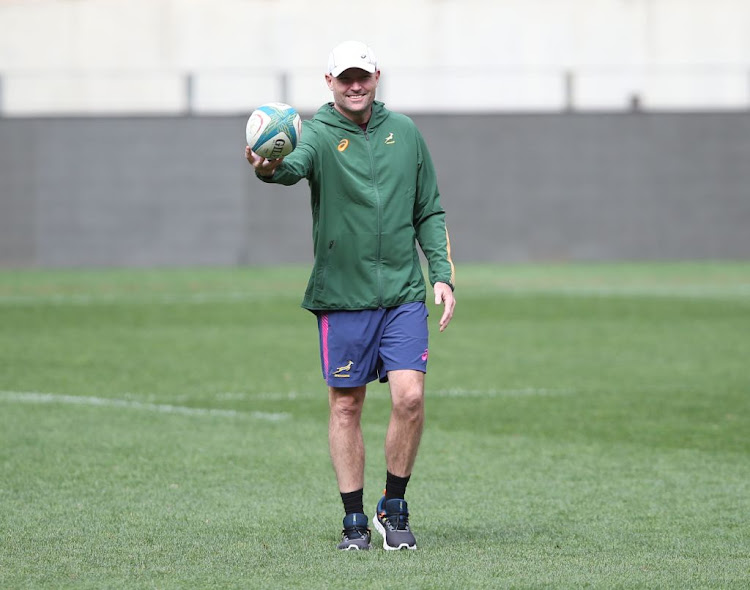 In a country where they are used to observing near endless rules and regulations, the Springboks are taking Covid-19 protocols and restrictions in their stride as they remain in quarantine on the Australian east coast.

The team, along with Argentina, are fenced off in a “red zone” as they sit out their mandatory quarantine period before the remainder of their Rugby Championship obligations.

With no contact allowed with the locals, including the hotel staff, the Boks have to clean their own rooms, have to remain in there when laundry is collected and have to dish their own food in the dining area. A late night burger courtesy of room service is clearly out of the question.

They have no access to the swimming pool but in consultation with Los Pumas are allowed to alternate the use of the gym and the training field.

Springbok coach Jacques Nienaber gave a glimpse of what life is like in their near dystopian, if not Orwellian, existence in Queensland.

In fact, during the online media briefing on Tuesday, Nienaber and No 8 Duane Vermeulen were reduced to wry smiles as a stern voice over the public address system reminded the hotel inmates to remain in their rooms while the laundry collection was being conducted.

“We are in a red zone and no-one is allowed in,” explained Nienaber. “For meals we are told via the public address system when the food is ready and then we have to go to the dining area and Argentina have to eat at the same time.”

Nienaber stressed, however, that the Boks and Argentina are working well together to help ease the quarantine burden which ends next Friday.

The Boks' bio bubble, however, was thought to be pricked when one of their staff members returned a false positive Covid test.

The team had to go into isolation while two more tests were conducted on the staff member who subsequently returned negative tests.

It meant the Boks could not train on Monday but preparations for their clash against the Wallabies next week have now started in earnest.

The Boks go into the Rugby Championship on the back of a series win over the British and Irish Lions but questions have been raised about their preparedness for this competition in the absence of the exposure the now defunct Super Rugby would had given them in the past.

Nienaber, however, is not the least concerned that his players have not encountered the cream of the Antipodes this season. “We haven't been exposed to their individual players. Super Rugby, however, was different to Test rugby,” Nienaber reminded.

“In 2019 the Jaguares and the Crusaders played in the last Super Rugby final. The Bulls, who were our best team only made it to the quarterfinals. We still went on to win the Rugby Championship. Test match rugby is different,” the coach stressed.

Having emerged victorious from their arm wrestle against the British & Irish Lions, the Boks expect to be tested across the expanse of the field against the Wallabies and the All Blacks.

“It will be fast, quick, and about continuity. It will be about chasing ball in play. If it's on, they'll play and when there is slow ball they'll play the percentages.

“It will be proper Test matches in the sense that if they want to open it up they will and if it's not, they'll play a territorial game.”

How the Boks go about their business is likely to invite scrutiny given the ultra conservative way in which they and the Lions conducted their combat. The Boks have been roundly criticised for their unadventurous methods but they are unlikely to deviate from their battle plan.

“Each team has their own skills set,” reminded Nienaber. “It has its own unique DNA. Teams play towards what strengthens their DNA. That is the beauty of rugby.

“In 2019 we played the most attack-minded team in the quarterfinals (of the World Cup). We then had to change for a different type of game against Wales and again for the final against England. It's about your ability to adapt,” Nienaber stressed.