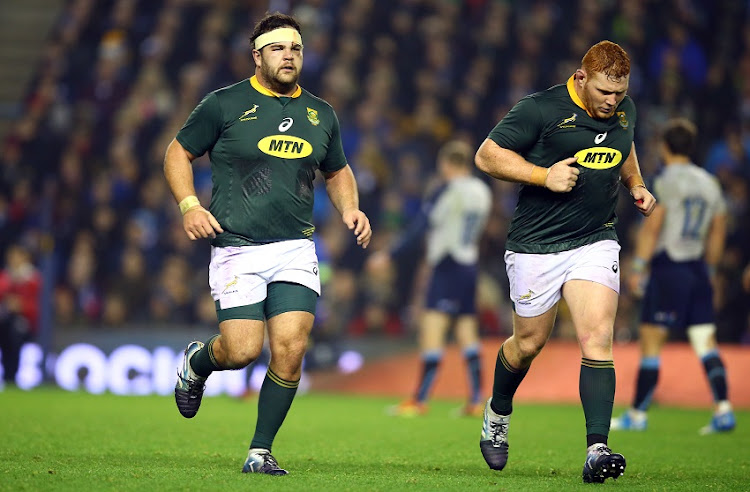 As the ballast of the Bok scrum‚ the responsibility that rests on Frans Malherbe's shoulders is perhaps weightier than most.

When he was selected on the bench in the opening Test of the series against the British & Irish Lions along with franchise teammate Steven Kitshoff‚ it came as a surprise.

But this pales into insignificance to the optical illusion that followed when the Bok pack went backwards in the second half just when another forward gear seemed to be the only logical direction.

With another game under the belt‚ Malherbe and Kitshoff were promoted to the starting team last weekend and normal service resumed.

But Malherbe was careful not to lap up the plaudits.

“We have grown a lot‚” he said of the Bok scrumming unit. “Credit has to go with the back five. They bought into our plan. Obviously we won't be able to generate power without them‚” noted Malherbe.

That was despite the fact that the back five featured lock Franco Mostert and loose forward Kwagga Smith (who came on as a first half substitute)‚ who aren't the most hulking candidates in their respective positions.

Such was the grip the Boks held over the Lions that the tourists' only changes up front for the deciding Test have occurred in the front row where loose head prop Wyn Jones‚ who has recovered from injury‚ and hooker Ken Owens have been brought in. They formed part of a Wales front row that helped set the base for their success in the most recent Six Nations tournament.

“All of them are world class players‚” noted Malherbe.

“Our focus is with us. We must make sure we are sorted and functioning 100 percent. You saw the impact Trevor (Nyakane)‚ Vince (Koch) and Malcolm (Marx) made off the bench last week. Everyone's at the same quality level. Not a lot changes in our prep‚” said Malherbe.

He also wasn't having a UK-based journalist's line of inquiry about what exactly SA Rugby's director of rugby and Springbok waterboy Rassie Erasmus' actual role is.

Perhaps befitting the number he plays is‚ Malherbe gave it a Kallis-like dead bat.

“Rassie has been involved with us since 2018‚” he said matter-of-factly. “Everyone in the squad has a lot of respect for him. Whenever he guides us or gives an instruction the guys listen. There is a coaching team and everyone has their department. There is a system in place where every coach covers their area. We follow our coach-player relationship system.”

If Malherbe gives the impression animation does not come to him easily‚ he did reveal a slight sparkle when talking about the front rankers who came off the bench last weekend.

“We are learning a lot from each other. We are working together to make the team better‚ I know it sounds a bit cliched. The best example for me coming off the field on Saturday and seeing the impact the bench made is a big satisfaction for me.”

If it was at all possible‚ the Boks‚ two years on from the World Cup appear to be even more passionate about the scrum. That human touch runs deeper thanks to scrum devotee Daan Human.

Malherbe has warmed to the team's scrum coach‚ himself a former Bok loosehead.

As for forwards coach Deon Davids: “I enjoy his passion for line-outs‚” said Malherbe. “He has attention to detail and the small stuff that stands out for me.”