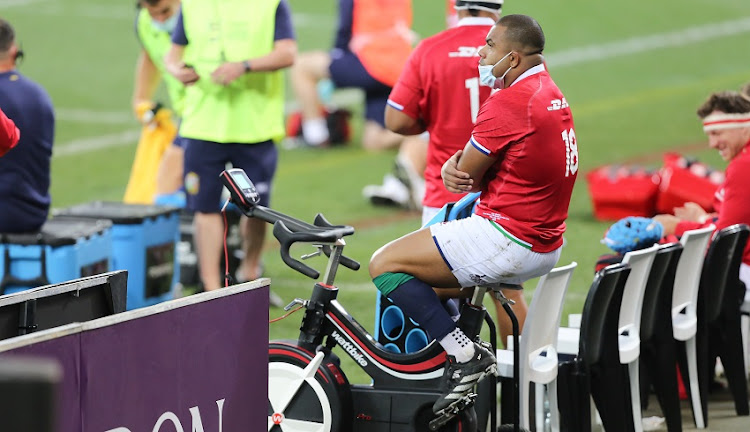 Kyle Sinckler of the B&I Lions spinnig on a bike before coming on as a substitute during the Castle Lager Lions Series 1st Test match between South Africa and British and Irish Lions at Cape Town Stadium on July 24, 2021 in Cape Town, South Africa.
Image: EJ Langner/Gallo Images

So confident was British &amp; Irish Lions coach Warren Gatland that Kyle Sinckler would be cleared of a biting allegation that he included the prop in the squad for Saturday's deciding Test against the Springboks in Cape Town.

Later in the day‚ Sinckler was duly cleared of the alleged bite on Bok lock Franco Mostert‚ which has paved the way for his participation on Saturday.

Sinckler‚ who was the only one cited following the tempestuous second Test won 27-9 by the Springboks in Cape Town‚ would have faced a lengthy ban had he been found guilty.

Sinckler is now free to line up next to his teammates‚ some of whom he might have trouble recognising‚ given the alacrity with which Gatland wielded the axe for the final Test.

In a positional switch Robbie Henshaw moves from 12 to the 13 jersey vacated by Harris.

While making two changes in his front row‚ Gatland has opted to retain his second and back rows for the crunch third Test.

England's Sam Simmonds however‚ makes it onto the bench‚ and will likely bring some speed to the Lions' backrow in the latter stages of Saturday's Test.

By returning Price to the starting line-up Gatland has restored the halfback combination that helped the Lions crucially win the battle for territory in the first Test. Another player who helped them gain the upper hand in that department in the first Test‚ Owen Farrell‚ is missing from the match 23.

The elevation of Adams is recognition for his try scoring feats while Aki will now help shore up a battered midfield next to compatriot Henshaw.