Boks bludgeon victory to level series against the B & I Lions 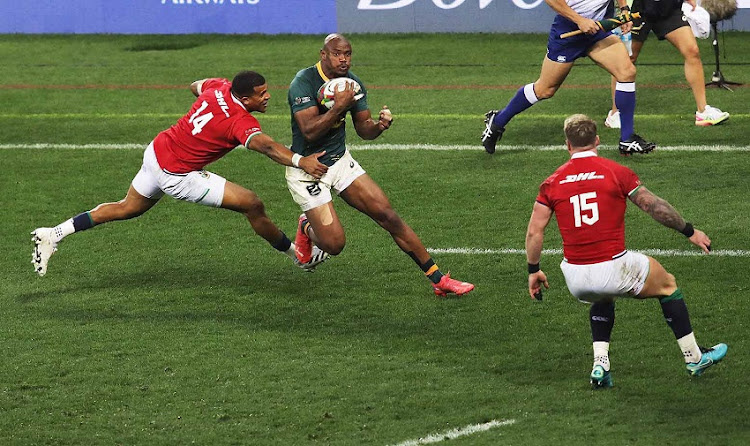 The Springboks capped a week in which we ruefully had to remind ourselves this series required a 12-year wait, by delivering a performance in which their energy and drive got their point well across.

When the actual business of rugby was restored to its proper place of combat, the Springboks at times bludgeoned the British & Irish Lions to level the three-Test series which will see the decider take place here next Saturday.

This victory required a lot of blunt force but the Boks were also strategically savvy by playing away from the Lions' strengths, which they rather helped accentuate a week earlier.

In scenes reminiscent of the Rugby World Cup final the Bok forwards gradually got on top, in no small measure due to the impact of the Bomb Squad and by the time the final quarter arrived that pulverising effect had the Lions well beaten.

This was a nerve jangler in the opening hour but the match started turning in the hosts' favour when World Cup hero Makazole Mapimpi scored to hand the hosts the lead.

While it never lacked gladiatorial drama, the match it was one thoroughly bereft of flow.

For all the talk among rugby's higher ups and lawmakers of speeding the game up and making it a spectacle, this match, if it is deemed to be a benchmark, fell desperately short.

This was a stop-start affair, with interruption around every corner, most often for reviews by the television match official.

The tension was palpable and things boiled over in the 25th minute when several players grabbed each other with much intent but without the need to stay inside Queensbury Rules. There wasn't much in it. It was like watching 99 red balloons go by.

As predicted though it was high in attrition.

The Boks were dealt a massive blow when Pieter-Steph du Toit was forced to leave the field with an injury around the 20-minute mark. He suffered the blow much earlier but his vast physical capabilities were well impaired by the time he left the field.

His departure that early made their win all the more impressive.

The Lions were also dealt a blow although entirely self inflicted when Duhan van der Merwe was yellow carded for tripping, or rather, kicking Cheslin Kolbe on the ankle.

Soon however, Kolbe too was bin bound for upending the aerial Conor Murray.

The early exchanges were largely characterised by frenzied Springbok attack but they were repelled by equally rugged bone rattling Lions' defence. The offensive defence not just stunts moments but it gradually saps the will to run into brick walls.

The boot of Dan Biggar probed teasingly and the Bok sweepers had to be on guard.

Last week the instruction was to kick only the easy attempts and when Biggar lined up his first the ball just required a simple prod.

The Lions maul disruption made an early impression, while they shaved the hosts in the scraps on the deck. What would have been more frustrating for the Bok coaches however was their inability to secure reliable line-out possession.

It was gripping stuff but the Boks played with renewed resolve after the break.

Things improved markedly in the second half as the Springboks too applied a spoiling hand at the Lions' feed.

The odds on them securing decent possession lengthened considerably with the introduction of Lood de Jager for Jasper Wiese after the 50-minute.

Mapimpi routinely rose to the occasion, while Eben Etzebeth was as in the Lions' faces as was legally possible.

Franco Mostert, Siya Kolisi, Lukhanyo Am and Damian de Allende got through a mountain of unglamorous work. The captain got a few slaps on the back when he operated in concert with Am to foil Robbie Henshaw's attempt to get over the tryline in the first half.

Mapimpi scored a fine team try early in the second half after solid build-up work that had its roots in a scrum penalty.

Am scored, also after concerted Springbok pressure and Faf de Klerk's wherewithal to chip the ball into the in goal area. It took an eternity before the officials were satisfied a try was scored.

The Springboks who took residence on Cape Town's Foreshore for this series must have felt in the build up they are between Devil's Peak and the deep blue sea.

They would have slept easy last night.