Boks promise to bounce back with fire and anger 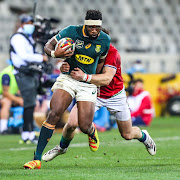 Image: @Springboks/Twitter Siya Kolisi in action in the first test against the British & Irish Lions.

The British and Irish Lions can expect “fire and anger” from vanquished South Africa in next weekend’s second test, Springbok scrumhalf Faf de Klerk has promised after a home defeat in Saturday’s first clash.

De Klerk scored a try at the Cape Town Stadium but it was not enough as the Lions roared back from nine points down at half-time to win 22-17 in an attritional contest to go 1-0 ahead in the three test series.

“We are a proud nation and we'll definitely make sure that we rectify the mistakes we made," said the World Cup winning scrumhalf.

“We will definitely come back with a bit more fire in our belly and anger but we need control that anger to make sure our discipline is in check, but I think if our discipline is good we should be all good going forward. But it’s going to be another massive challenge next week. We like our backs against the wall, we can fight back from it.”

“Our discipline slipped in the second half. If we can replay the first five minutes of that second half it could be a different outcome, but it was a very close game, with a few decisions here and there that could have gone either way. Right decisions, mind,” he said.

“The boys were very disappointed in the change room, they were really gutted. We wanted to win this first one but it is a three test series and we need to keep our heads up. A lot of boys performed very well, we haven’t played together for a long time so it was good to be out there together again.

“There were a lot of learnings from this game, so now there cannot be any more excuses,” De Klerk added.

The second test will also be at Cape Town Stadium next Saturday followed by the last meeting on August 7.