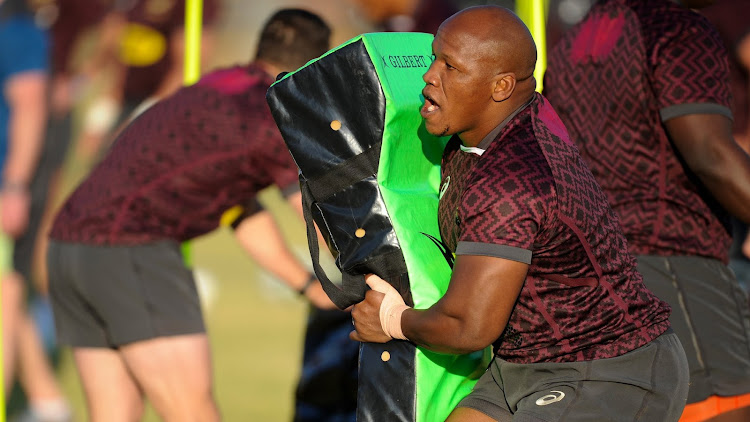 Bongi Mbonambi during a training session at a Springboks camp in Bloemfontein on June 25 2021.
Image: @Springboks/Twitter

Few can call into question Bongi Mbonambi's appetite for confrontation.

To put down any suggestion from naysayers that the Springboks are going into the Test series underdone against the British & Irish Lions the combative hooker in a virtual media conference used an analogy that would have had teammates Damian de Allende and RG Snyman squirming.

“The only thing they are doing is throw more petrol on the fire‚” Mbonambi stated matter of factly.

You may recall De Allende and Snyman were two of four Munster players injured when petrol was poured onto a fire pit they were next to in June. Snyman is still out injured as a result.

Mbonambi's bellicose talk though will be a reminder that the Springboks mean business even if their preparation has not been forged in the furnace of much recent combat.

They are a battle hardened group however. They are hoping some of the residual qualities from 2019 when they spent almost 20 weeks together en route to Rugby World Cup (RWC) glory‚ have endured and will still stand them in good stead.

Mbonambi is in no doubt that their muscle memory will have instant recall come kick-off on Saturday‚ but concedes their lack of game time is far from ideal.

“We are at a bit of a disadvantage. That is one of the realities of Covid. We are working hard on the training pitch‚ and off.” The 'off' bit will likely make this the best prepared Springbok team ever from an analytical point of view. “We are doing video work analysing the opposition. A lot is happening behind the scenes and we are working as hard as we can‚” said the hooker.

Mbonambi who only rejoined the squad on Monday after coming out of Covid enforced self isolation admits the Boks now have no choice but to hit the ground running.

“Being in isolation was tough. We didn't get much physical stuff done. Most of the preparation we've done was on the mental side and analysing.

“It is our aim to start with intent. We have a few more days to get things into place.

Joining the team on Monday you had to make sure you are here physically and mentally. We must raise the intensity of the team.”

Mbonambi has certainly raised the temperature and that's just from speaking to a laptop.