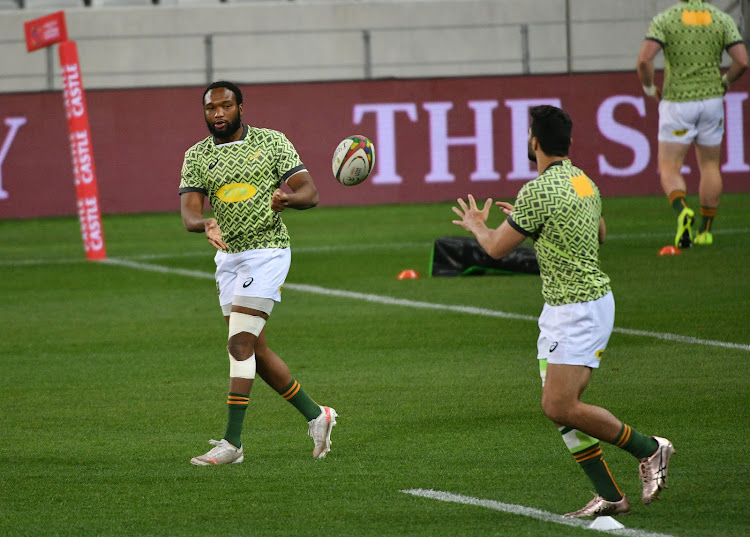 Springboks players during a warm up session.
Image: @Springboks/Twitter

South Africa flyhalf Handre Pollard insisted his side will be ready for the British & Irish Lions test series, which starts on Saturday, despite disruptive preparations that included a cancelled warm-up test and Covid-19 infections in their camp.

This is despite uncertainty over the availability of Springbok captain Siya Kolisi, who faces a medical examination on Monday to assess his fitness for Saturday’s first test at the Cape Town Stadium.

“There is no way we are not going to be ready, playing against the British & Irish Lions, playing for your country,” Pollard told a news conference on Monday.

“Emotionally, physically we are all fine. We’ve had hard weeks of training. The way we train is harder than the game, so we’ll be ready for whatever comes our way on Saturday.”

Pollard was among 14 Springboks and six coaching staff who contracted the CovidD-19 virus after the first of two tests against Georgia at the start of the month.

The second game was cancelled while the players had to isolate in their rooms.

The 27-year-old said he had been asymptomatic but been forced to restrict his preparation to video analysis and some workout in his room.

“I didn’t have any symptoms, so I got back to training pretty quickly. Physically I’m OK. It was very strict once we went into the CovidD wing of the hotel.

"The first five, six days were spent in the room, giving your body time to fight whatever it’s got to fight. Then we were provided with the necessary gym equipment in our rooms.”

Pollard, a key element of the Springbok’s World Cup winning squad, said it allowed him to stay on top of his physical condition.

“It was not about training hard or getting fit but just about balancing it out and not losing what you already have.”

As for the three-test series, he did not feel there were any secrets or significant differences between the two teams.

“I thought they (the touring Lions) weren’t challenged as hard as they probably would have liked in those first few (tour) games.

"But we saw glimpses here and there of what they do when they are under pressure, and they are probably expecting more of that.

“I don’t think it’s a big secret of what’s coming. The two sides will play pretty similar games and it’s going to come down to the physicality, set pieces and the basics.

"It always comes back down to that when it’s big test match rugby,” Pollard added.

Kolisi and World Cup winning winger Makazole Mapimpi are to be examined on Monday to see whether they are clear to play in Saturday’s first test after returning positive Covid-19 tests a fortnight ago, officials added.