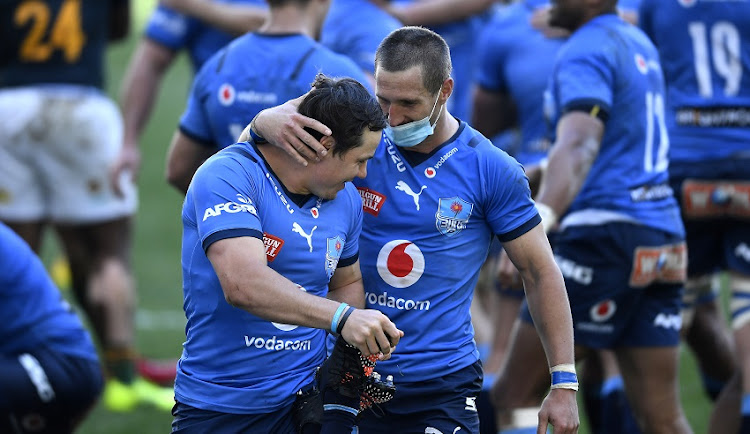 Vodacom Bulls celebrate after winning the match during the Tour match between South Africa A and Vodacom Bulls at Cape Town Stadium on July 17, 2021 in Cape Town, South Africa.
Image: Ashley Vlotman/Gallo Images

The shadow Springboks made way for squad members on the fringes and judging from this performance many will remain on the margins.

The Bulls continued to flex their considerable muscle as their greater cohesion and attacking prowess carried them to a 17-14 over SA A.

While the Bulls who delighted with their enterprise and dexterity in the second half will bask in more glory‚ the Springbok brains trust will have cause for concern over the depth in their squad.

Sure‚ most of the big guns likely to play the British & Irish Lions in the first Test weren't on display here but those who are next in line aren't exactly kicking the door down.

The Bulls may make the counter argument that the match in fact showcased the vast depth of South African rugby.

To be fair‚ the Bulls were in an invidious position. Beating SA A may have endowed them with the instant gratification of a looter‚ but it comes with the lingering caveat‚ at what national cost?

Although Jake White's team deserve kudos the Bulls‚ this match was really about SA A who had three returnees from the team that played in mid week. Damian de Allende who recently returned from injury was again thrust into the thick of things.

As he did last Wednesday he again made some telling hits in midfield. His physicality remains a must-have against the Lions. By the hour mark he was well rested on the bench having done enough to prove his readiness for the series.

The SA A team went into the halftime break with a 14-0 lead thanks to tries by Aphelele Fassi and Wandisile Simelane.

Again the A-team found the going harder in the second half‚ failing to penetrate the Bulls defence. The Bulls matched them in the physicality stakes and the team in blue was particularly eager when it came to contesting possession at the ruck.

Johan Goosen back in the No10 jersey delivered some sure touches for the Bulls. In fact‚ it was his vision and execution that helped put Keegan Johannes in under the posts after a delightful long range attack.

Equally sweeping was the try by Johan Grobbelaar moments later when the Bulls again fragmented the SA A defence.

That converted try locked the score at 14-all after 67 minutes but it was left to Chris Smith to kick a long range penalty to seal the A-team's fate.