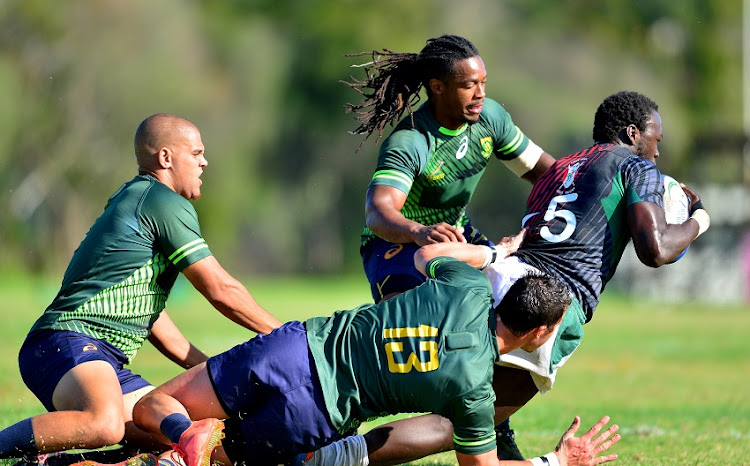 Billy Odhiambo of Kenya tackled by Branco du Preez, Zane Davids and Ruhan Nel during day 2 of the Rugby Africa's Sevens Solidarity match between SA 1 and Kenya at Markotter Stadium on May 09, 2021 in Stellenbosch, South Africa.
Image: Ashley Vlotman/Gallo Images

The Blitzboks have all been released from quarantine with the sole exception of one person on the management team‚ SA team management said in a statement on Friday.

All 14 players in the squad were “cleared by local health authorities” on Thursday.

The squad‚ considered medal hopefuls‚ was quarantined after arrival in Tokyo earlier this week because one passenger on their flight into Japan had tested positive for Covid-19.

“Though one member of team management has been deemed a close contact … all other individuals in the 20-member Springbok sevens contingent were found not to have been in close contact‚ including all 14 of the players.

“The outcome was announced following a stringent process of review and thorough assessment of the circumstances‚” team management said‚ adding the member of the Blitzboks management would remain in quarantine.

“The rest of the Blizboks squad has been released and will be able to continue their final build-up to the Tokyo Games.”