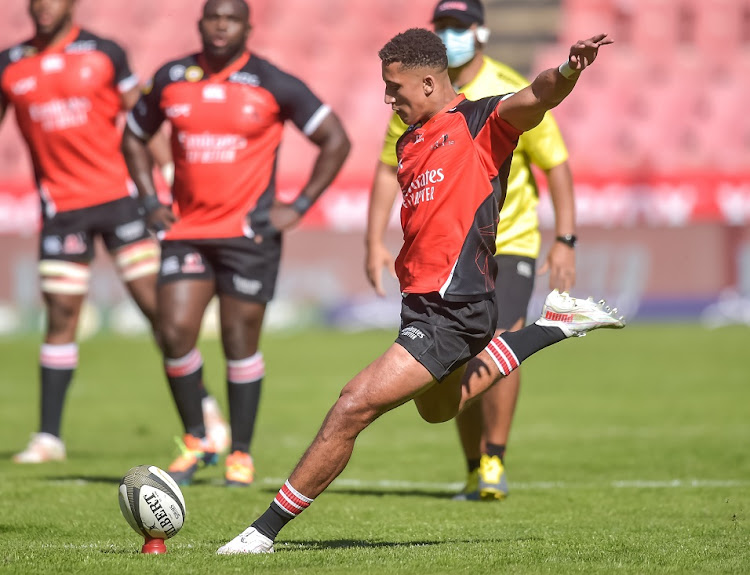 Saturday’s tour opener is all about first impressions, and to that end Lions coach Ivan van Rooyen believes his side needs to seize the initiative in their clash against the touring British & Irish Lions at Ellis Park.

Although he reminded that the visiting Lions’ Test cap average is probably higher than his team’s age average, Van Rooyen contends his team has a slight chance of catching the tourists cold in their first match.

“To catch a Test player off guard is a difficult thing,” Van Rooyen conceded.

“I also understand they arrived on Monday so they probably only had two or three sessions.

“There could be a slight door open there. Obviously for us to capitalise the first 20 to 30 minutes will be vital. We are playing at altitude and we see this as an opportunity for us.”

His young, inexperienced team has struggled for consistency in recent times after a period of relative success when they reached the Super Rugby finals between 2016 and 2019.

Their main SA rivals rank higher in the general estimation but the Lions hope to again make an impression against foreign opposition.

“This is the first time since March last year that we are not playing a local team,” said Van Rooyen.

“I'm really excited about that.

“How are we going to approach it? This is a once in a career opportunity for us.

“It is logical to say we going to have a full go. In a big game like this if you are too conservative and don’t have a brave mindset you are probably in for a hiding anyway.

“It is an opportunity for us to show the people in SA and the world what we represent and stand for. It is a massive honour to play the first game of the tour.”

As always‚ the collective mood in South Africa is in need of a lift.
Sport
6 months ago

Georgia have named a largely settled team that boasts four players with more than 50 caps in the starting line-up for their clash against Springboks ...
Sport
6 months ago

As much as his team will be desperate to put their best foot forward early on, the tourists will be keen to set a marker for the remainder of their tour. Sparks are likely to fly.

“There will be physicality,” predicted Van Rooyen.

“The collisions should be nice and aggressive.

“It is important for us to start well there, whether it is in the set piece or attack and defence. The collisions in the first 20, 30 minutes will be right up there.”

“It is a massive opportunity for a player like him. He is a great talent. Someone like Jordan gives us a massive right boot and organises the attack well. If we need someone to kick that 60m penalty he is a guy who can do it,” said the coach.

There was, however, no room for Springbok wing Courtnall Skosan.

“Unfortunately there were a few who were Covid-19 contacts. They missed training and we felt it was a week too soon,” said the coach.

Van Rooyen surprised in the front row by opting for the generally preferred trio of Sti Sithole, Jaco Visagie and Carlu Sadie to come off the bench.

Tighthead prop Jannie du Plessis, who played for the Sharks against the British & Irish Lions in 2009, was not included in the match 23.

As you’d expect from a man who drives a hard bargain on the field‚ Handre Pollard has no problem spotting a transaction weighted in his favour off it.
Sport
6 months ago

Back together after almost 20 months the Springboks coach on Tuesday unveiled a squad that features three debutants for Friday’s Test against Georgia ...
Sport
7 months ago
Next Article