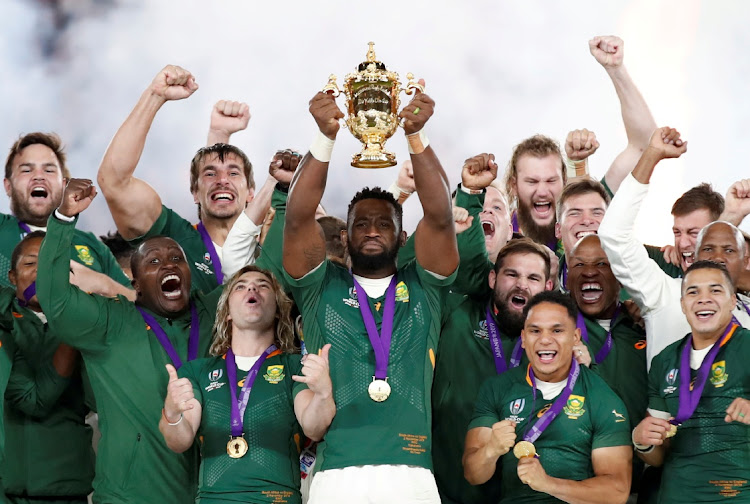 A file photo of South Africa's Siya Kolisi celebrating with the Webb Ellis trophy with his teammates after winning the Rugby World Cup in Japan in November 2019.
Image: Childs/File Photo/File Photo

As always‚ the collective mood in South Africa is in need of a lift.

It was the case 20 months ago when the Springboks surged to Rugby World Cup glory in Japan‚ and the country is again in need of distraction from daily travail and outright peril.

Springbok captain Siya Kolisi and his team don’t have vaccines to offer but they have a fast-acting‚ if temporary‚ antidote for the pall that has descended over the country and they are desperate to administer it when they run out against Georgia at Loftus Versfeld on Friday.

Picking up where they left off in the World Cup final exactly 20 months ago is the shot in the arm Kolisi hopes will lift mood and spirit.

“With everything that has been happening it will help some people. When we play on weekends it normally brings a good feeling in the country‚” said the Bok captain.

“There are a lot of people struggling but hopefully we can put a smile on people’s faces.

“People are going through a tough time. We are still privileged and fortunate to do what we love.”

The Springboks may be cocooned in their bio-bubble but they are not oblivious to the plight of so many.

“We are kept informed‚” reassured Kolisi about the impact of the pandemic.

“We’ve been staying in and working as hard as we can on the field. We wanna stay safe and have an opportunity to play. We are doing our bit.”

As a team the Springboks are also desperate to deliver a performance worthy of world champions.

In the lead-up to the 2019 final they were imbued with confidence and the cohesion and commitment to the cause with which they went about their business was easy to see.

They are craving that winning feeling.

“Management did their best to get us ready for this‚” said Kolisi.

“We have adapted to new ways of doing things.

“It is awesome to have so many guys from the World Cup group. In the alignment camp we were able to spend time together and see the game plan.”

Although Jacques Nienaber took over head coach duties from Rassie Erasmus the Bok blueprint has largely remained the same.

“The game plan hasn’t changed much.

"There are tweaks here and there. We will need physicality and work rate‚ things you don’t need talent for. We are still looking for warriors‚” Kolisi said.

It was a point underlined by assistant coach Mzwandile Stick.

“Physicality is part of our DNA. We normally have big physical forwards. We won’t drift away from that‚” said Stick.

He reminded that Nienaber and Erasmus had come a long way and shared similar values and thought processes to the game.

“Jacques was part of the system since 2018. The players know his voice‚ from when he was defence coach. Not a lot has changed.

“The working relationship between myself Rassie‚ Jacques and Felix Jones is the same. The only changes are two forwards coaches‚ Deon Davids and Daan Human‚ who are new.”

Although Georgia are their initial hurdle Kolisi is enthused and energised by the knowledge that the British & Irish Lions have arrived.

The prospect of playing them is all the more real.

“It is exciting to know they are here. Everything is going ahead. We take things as they come.

"I was still at school. It is an amazing feeling. Some of our legends didn't get that chance to play against the Lions. The guys are super-excited‚” said Kolisi.