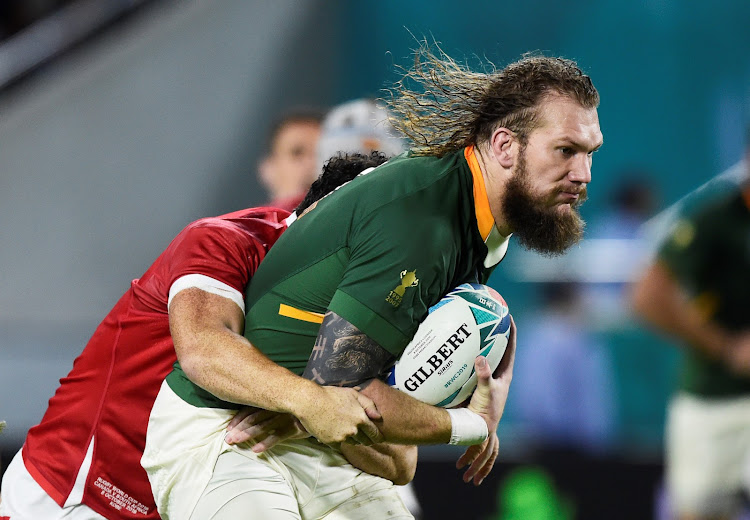 RG Snyman was one of the players involved in the fire pit incident.
Image: REUTERS/Rebecca Naden

Springbok coach Jacques Nienaber has confirmed that there will be no replacement for injured Duane Vermeulen and that the team are expecting RG Snyman and Damian de Allende in camp as soon as they are cleared to travel.

The talismanic Vermeulen went under the knife on Wednesday after he sustained an ankle injury playing for the Bulls last week while Snyman and De Allende of Munster suffered superficial burns in a fire pit accident in Ireland.

“I think Duane was operated on today [Wednesday] on his ankle injury.

"Hopefully surgery goes well and they rehab goes well. Some players come back from surgery between five weeks to 16 weeks depending on the severity of injury‚” Nienaber said.

“The surgeon will probably know once he has opened it up and had a good look what’s going on inside.

"Certain players come back very quickly – Jessie Kriel had a similar injury just before the World Cup in 2019 and he was back quicker.

“But then it depends on the severity of the injury and we will get more feedback on that after the surgery.

"On a replacement‚ we had a discussion about that and we are not getting a precautionary replacement.”

On the issue of Snyman and De Allende‚ who the coach is hoping can both play against Georgia next month‚ Nienaber said he has spoken to the players and the Boks are hoping to have them in camp as soon as possible.

The pair suffered superficial burn injuries in a now-infamous fire pit incident‚ where one of the players threw petrol onto the flames‚ leading to the canister igniting and exploding.

“They had an accident in the fire pit – I think that is well-documented now.

"I have spoken to both of them and they are fine and their families are also fine‚ which is the most important thing‚” Nienaber said.

“They are seeing a specialist who is treating their burns and if he clears them to fly they will be on the plane coming to us as soon as possible‚ bearing in mind that they just need probably a couple of days to sort out their travel logistics.

“Obviously‚ accidents like that do happen and sometimes we can’t control them. That is why people call them accidents.

“For me having been in Ireland I understand and to put it in context it rains a little bit more in Ireland than in South Africa.

“When I was there‚ if you wanted to use wood fire to braai or sit in front if it like we do in South Africa‚ I did the same by putting a little bit of petrol on the wood.

"Otherwise the wood is wet and you can’t get it burning.

“I did it the same way and everybody does it that way over there‚ and they have explained it to me and it makes perfect sense that that the fire just ran up into the canister then the canister fell and petrol spilled over their legs.

“It is superficial burns and thank goodness for that because I have worked in the burns unit for three years as a physiotherapist and I understand the pain.

"I told them that I understand the road that they are going to walk and good luck with that. Luckily their burns are superficial.

“It could have been way worse with kids involved. I am just thankful that they are fine and they are going to get through it.

“It is not ideal‚ because I would have liked to have them fine and training.

"But unfortunately there was an accident and we have to make plans to get them into the mix as quickly as possible.”